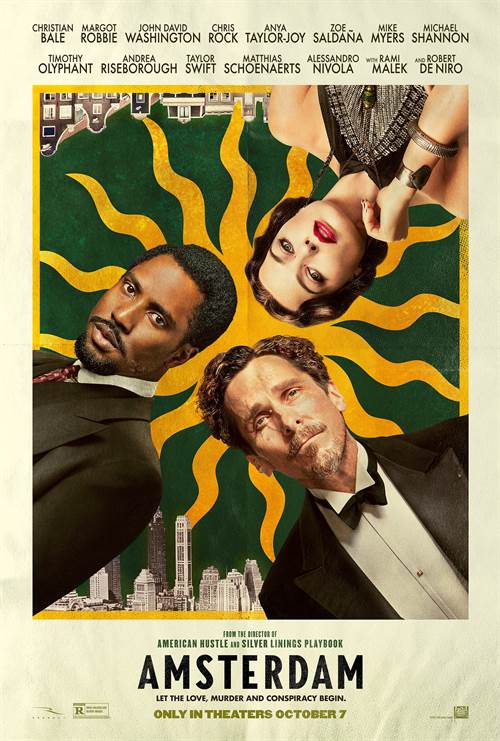 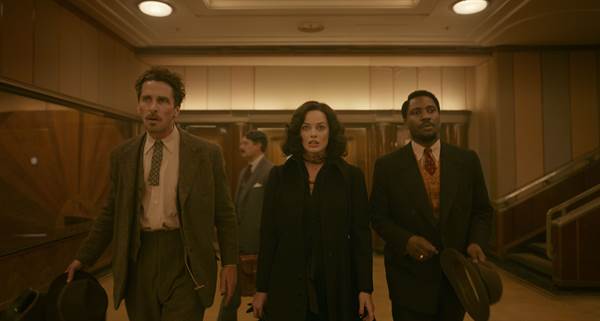 Listen to the Amsterdam soundtrack on Apple Music.


See an Advance Screening of AMSTERDAM in FLORIDA  9/29/2022 3:47 PM EST
If someone described to me a murder-mystery film set in the 1930s with an all-star cast, I would instantly think of an Agatha Christie novel adapted for the big screen.  In the next breath if someone mentioned David O. Russell I would think of incredible storytelling.  Put those two elements together and I would be interested in seeing it.  Luckily, such a film called AMSTERDAM is headed to theate...  More>> 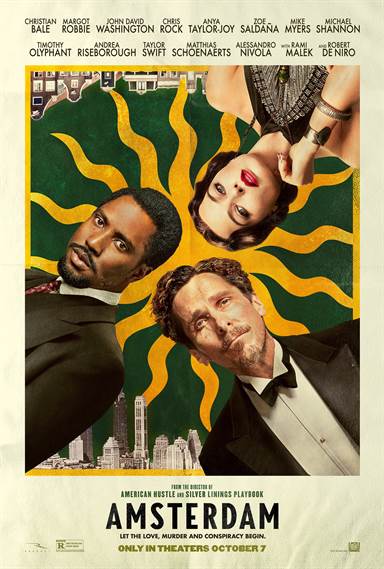 Amsterdam. A city of beauty and history and a reputation for decadence.  In the 1930s, as the reminders of World War I were still being felt and the threat of World War II began to loom large in the background, factions for both sides were plotting and planning all over Europe.  Resources were being stockpiled and weapons were being created as a precaution.  However, When a Doctor (Christian Bale; The Dark Knight), a nurse (Margot Robbie; Birds of Prey), and a lawyer (John David Washington; Tenet) witness a murder of a prominent American, they become the main suspects in her death.  Written and directed by David O. Russell (Silver Linings Playbook), Amsterdam hits theaters this week.

Doctor Burt Berensden (Bale) and attorney Harold Woodman (Washington) became friends in France during the War.  When they both were injured they went to a hospital and met nurse Valerie (Robbie).  Needing a new, glass eye, Burt followed her to Amsterdam with Harold in tow as he would go anywhere Valerie was.  The three had a carefree life there until Burt was summoned home by his wife and Valerie left Harold without a trace.  Years later, when Senator Meekins (Ed Begley, Jr.; Pineapple Express) is mysteriously murdered and Burt and Harold are blamed, they turn to Tom Voze (Rami Malik; Bohemian Rhapsody) for help and at his home meet his sister…Valerie. With more at stake than they could know, the three reunited friends agree to help MI6 and CIA agents to capture the real killer(s).

Obviously armed with a list of who’s who in Hollywood, Russell amasses a cast of stars to be envied.  Besides the three leads and Academy Award winners Malik and Robert DeNiro (Taxi Driver), talent includes Anya Taylor-Joy (The Northman), Chris Rock (The Longest Yard), Matthias Shoenaerts (The Danish Girl), Michael Shannon (Revolutionary Road), Mike Myers (Austin Powers: The Spy Who Shagged Me), Taylor Swift (The Giver), Timothy Olyphant (Justified), and Zoe Saldana (Guardians of the Galaxy).  Unfortunately, like 2019’s Knives Out, there are so many terrific actors that there isn’t enough time to showcase them all making the movie seem as if a little bit of a letdown.

Robbie is incredibly talented and so strikingly beautiful that she dominates every scene she is in, even to the point of eclipsing the equally talented and beautiful, Taylor-Joy, which is no easy feat to pull off.  Bale and DeNiro are excellent as always but one would expect no less from them.  The weak point in the group is Washington.  He has a presence on screen but his acting is uneven making his character forgettable.  I have seen him do some good work in his career but I have also seen him do some not-so-great work as well so his performances tend to be hit or miss.

The saying “too much of a good thing is not a good thing” can easily be applied to Amsterdam.  Too much plot makes it difficult to muddle through all the details, too many “stars” means many of them are underutilized, etc.  Russell could have used a story editor to take out some of the unnecessary moments and tighten up the story.  There is also a subtle political undertone that is very relevant in our country today and I’m sure some won’t appreciate the comparison.

Amsterdam could have been excellent and I was very excited to see it simply for the cast alone.  Sadly, I walked out underwhelmed and a little disappointed.  Even the costumes were rather plain, boring, and unmemorable.

I’d recommend skipping this film and start saving up your money to take a trip to the actual city of Amsterdam.