After Chicken Little causes widespread panic--when he mistakes a falling acorn for a piece of the sky--the young chicken is determined to restore his reputation. But just as things are starting to go his way, a real piece of the sky lands on his head. Chicken Little and his band of misfit friends, Abby Mallard (aka Ugly Duckling), Runt of the Litter and Fish Out of Water, attempt to save the world without sending the town into a whole new panic.

Download Chicken Little in Digital HD/4K from the iTunes store. 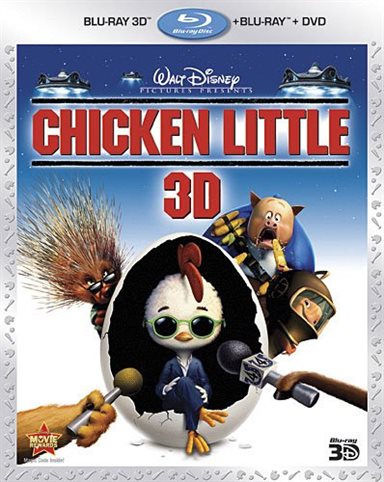 Another in a series of re-releases but this time in Disney Blu-ray 3D comes Chicken Little.  Chicken Little has the distinction of being the first full length fully computer generated animated film made completely by Walt Disney Animation Studios and being the first film marketed under the Disney Digital 3D brand.  The movie begins with a retelling of the classic Chicken Little story about the little chicken that gets the townspeople up in arms because the sky is falling.  In this case, it wasn't an acorn but was in fact part of the sky that hits Chicken Little.  But this sky was actually a panel from a spaceship that camouflages itself by displaying everything that appears behind it, which in this case was the sky.  Unfortunately for Chicken Little, he can't find the panel so the people of the town think he was hit in the head with an acorn and is crazy.
The townspeople mock him and in his own way, so does Chicken Little's father.   The movie continues one year later, with Chicken Little being part of a group of misfits, made up of himself (being extremely short), Abby Mallard (an ugly duckling), Runt of the Litter (a very large pig), and Fish out of water (a walking goldfish who wears a dive mask full of water). Of course the other kids make fun of them, and soon the sky panel comes back into the story.  This time Chicken Little and his friends trace the panel back to a UFO, and try to warn the townspeople again.  And moments before the townspeople arrive at the site of the UFO, it is able to camouflage again thus leading to a second wave of scorn from them towards Chicken Little.  Shortly thereafter Chicken Little's statements are confirmed when a large armada of UFOs descends upon the town.
The movie's greatest weakness is the consistency of the story.  At first it's a classic fable, then it's a son tries to make Dad like him story, and then it's a UFO story and so on.  Because of this it's hard to fully respect everything that occurs during the film as Chicken Little's dad is able to turn his feelings on a dime. With that being said, it is Chicken Little's gang is the best part of the movie but it is not enough to carry the movie.  The interactions of Abby, Runt and Fish are an integral part of the movie but they don't spend enough time exploring additional facets of their interpersonal relationship.
The 3D is very well done; especially considering this was Disney's first foray officially back in what is now an ongoing trend of 3D movies from Hollywood.  Mostly used for depth of field, the 3D is extremely realistic and sharp (just like the 2D Blu-ray).  However, the 3d does take some of the brightness away but not enough to be distracting.  The audio didn't seem to be as completely tuned for 3D like more recent 3D releases but is still extremely well done with the fully digital audio from the Blu-ray format.
This combo pack includes the 3D Blu-ray, a 2D Blu-ray with bonus features, including filmmaker Q&A, audio commentary, deleted scenes, an alien invasion game, as well as the features from the original DVD: Music videos, Hatching Chicken Little: The Making of the Movie and two Easter Eggs about Runt of the Little and Foxy Loxy.  The Easter Eggs are short videos featuring those two characters from the movie.  The pack also includes a DVD copy of the movie.  In all a good value, although it does not include a digital copy of the movie.