Following his great success with "North by Northwest," director Alfred Hitchcock (Anthony Hopkins) makes a daring choice for his next project: an adaptation of Robert Bloch's novel, "Psycho." When the studio refuses to back the picture, Hitchcock decides to pay for it himself in exchange for a percentage of the profits. His wife, Alma Reville (Helen Mirren), has serious reservations about the film, but supports him nonetheless. Still, the production strains the couple's marriage. 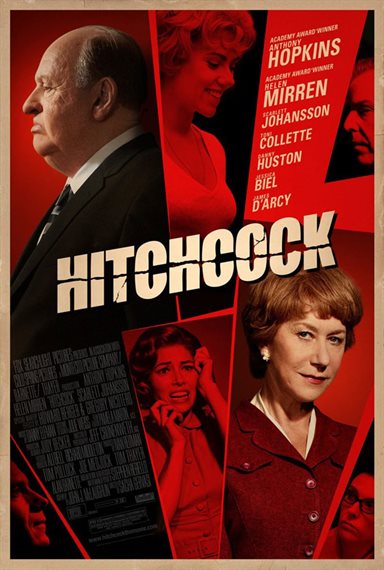 "Hitchcock" arrives in theaters just a month after the airing of HBO's "The Girl," an unflattering portrait of Alfred Hitchcock's troubled dealings with star Tippi Hedren during production on "The Birds" and "Marnie." While it similarly references the helmer's attempts to manipulate the blonde leading ladies who tickled his fancy, this comparatively bubbly take on the legendary director offers a more sympathetic, comedic assessment of the man behind the portly silhouette.

Following the 1959 success of "North by Northwest," Hitchcock (Anthony Hopkins), annoyed by press coverage suggesting he should quit while he's ahead, decides to tackle something bold and different: an adaptation of Robert Bloch's suspense novel "Psycho." Bloch's sordid tale of transvestism, incest and matricide strikes almost everyone as a tasteless choice of material for a world-class director, and when Paramount head Barney Balaban (Richard Portnow) refuses to finance the picture, Hitch opts to pony up the relatively low $800,000 budget himself, in exchange for a cut of the profits.

Despite her own reservations, especially when they're forced to mortgage the house, Alma (Helen Mirren), always her husband's closest confidante and often uncredited collaborator, lends him her customarily wry support. At the same time, she seeks another creative outlet fine-tuning a screenplay by longtime friend and "Strangers on a Train" scribe Whitfield Cook (Danny Huston), baldly depicted here as a cad with more charisma than talent.

Loosely based on Stephen Rebello's terrifically exhaustive 1990 book "Alfred Hitchcock and the Making of 'Psycho,'" the screenplay by John J. Laughlin (a co-writer on "Black Swan") is understandably hard-pressed to accommodate every fascinating aspect of the pic's production history. Still, it's disappointing that the film never gets beyond a superficial re-creation. What relevant details there are tend to get rattled off like bullet points, as when a Production Code censor (Kurtwood Smith) testily informs us that no American movie before "Psycho" has dared to show a toilet being flushed.

Considerable time is spent addressing the director's strained relations with actress Vera Miles (Jessica Biel) and his tender rapport with his new star, Janet Leigh (Scarlett Johansson), who fondly notes that, whatever Hitch's flaws, "compared to Orson Welles, he's a sweetheart." By contrast, Anthony Perkins (James D'Arcy) gets just a few fidgety lines and a coy, smirking reference to the actor's sexuality, and the film only glancingly acknowledges key contributors such as scribe Joseph Stefano (Ralph Macchio) and title designer/pictorial consultant Saul Bass (Wallace Langham). Cinephiles and academics may take issue with numerous other omissions (one never catches even a glimpse of the Universal lot's Bates Motel set, for example).

More egregious than any factual deviation, however, is the film's bizarre suggestion that Hitchcock's headaches were caused not merely by studio and censor interference, but by his own personal demons, stemming from his irrational suspicion that Alma may be having an affair. A series of pointless dream/fantasy interludes show Hitchcock consorting with Ed Gein (Michael Wincott), the serial killer who served as the real-life inspiration for Norman Bates, as if only someone a little nutty himself could have made a great film out of "Psycho." Similarly, the famous shower scene, the making of which could furnish its own movie, has been ludicrously dramatized so as to emphasize the helmer's alleged emotional instability on the set.

The result is a film that essentially contradicts the reality that "Psycho's" limited means, far from exposing the director's incompetence, in fact revealed the extent of his mastery. As such, "Hitchcock" offers almost zero insight into the peculiar workings of creative genius, or into the rich, taboo-shattering legacy of the film whose making it documents.

The upshot of Gervasi and Laughlin's conception is that the Alfred-Alma marriage was sorely tested by the demanding production but wound up saving it in the end. However, it does have the benefit of two lead actors who bring endearing shades of humanity to scenes of the Hitchcocks on the set and in their little-seen home. Mirren has the advantage of not only playing the less widely recognized figure, but also embodying the drama's moral compass; whether scolding her husband for his gluttonous appetite, or telling him off in the film's one riveting scene, she makes poignantly clear that Alma's frustrations with Hitchcock are inextricable from her devotion to him.

Outfitted with facial prosthetics, blue contact lenses and a hairpiece, always gulping rather than sipping a glass of wine, Hopkins does a droll impersonation of the director's iconic stiff posture and sinister tones, and he takes particular delight in his wickedly deadpan asides (on actor John Gavin: "Plywood is more expressive"). Yet while he looks more like Hitchcock than Toby Jones did in "The Girl," Hopkins doesn't quite match that actor's insinuating impact; physical likeness is only half the battle here.

Despite their own so-so resemblances to their real-life counterparts, Johansson and Biel have effective moments, while Michael Stuhlbarg cuts an admirable figure as the young Lew Wasserman, Hitchcock's agent and defender. The film manages a reasonable evocation of late '50s/early '60s Hollywood but still looks somewhat underrealized, and the occasional use of Bernard Herrmann's screeching violins only accentuates the blandness of the film's main score.