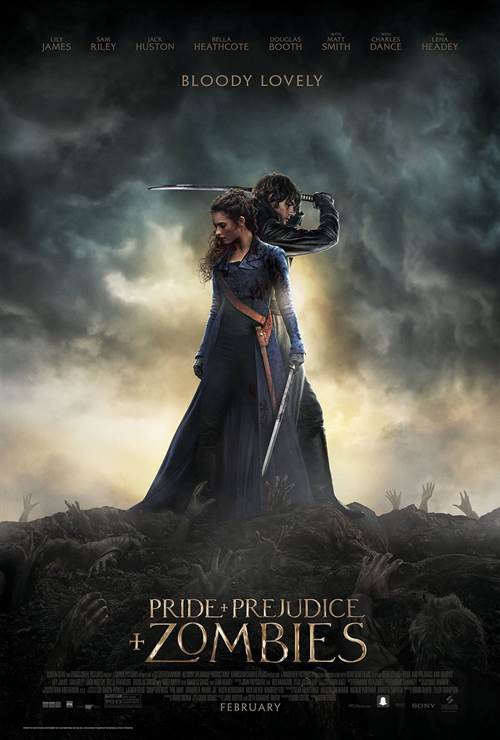 A zombie outbreak has fallen upon the land in this reimagining of Jane Austen’s classic tale of the tangled relationships between lovers from different social classes in 19th century England. Feisty heroine Elizabeth Bennet (Lily James) is a master of martial arts and weaponry and the handsome Mr. Darcy (Sam Riley) is a fierce zombie killer, yet the epitome of upper class prejudice. As the zombie outbreak intensifies, they must swallow their pride and join forces on the blood-soaked battlefield in order to conquer the undead once and for all.

Stream Pride, Prejudice and Zombies in Digital HD/4K from the AppleTV store.

Listen to the Pride, Prejudice and Zombies soundtrack on Apple Music.


Suffering From Star Wars Hangover? Pride and Prejudice and Zombi...  7/15/2015 9:15 AM EST
While Comic Con 2015 San Diego was still suffering a Star Wars hangover from Friday night, Saturday Screen Gems took center stage in Hall H and debuted their first teaser trailer for Pride and Prejudice and Zombies! The Sound system boomed, and while watching the Bennet sisters kick ass you just knew this is going to be a big film when its released in February of 2016. I got to sit and talk to som...  More>>

Lily Collins Set to Star in Pride, Prejudice and Zombies  5/2/2013 1:11 PM EST
Lily Collins, who starred in "Mirror, Mirror", will be joining the cast of Seth Grahame-Smith's "Pride and Prejudice and Zombies".  The film will be an adaptation of Grahame-Smith's novel of the same name.The film has had some difficulties getting off the ground.  Originally, Natalie Portman was attached to the project when it was being developed by Lionsgate, but after several directors and stars...  More>> 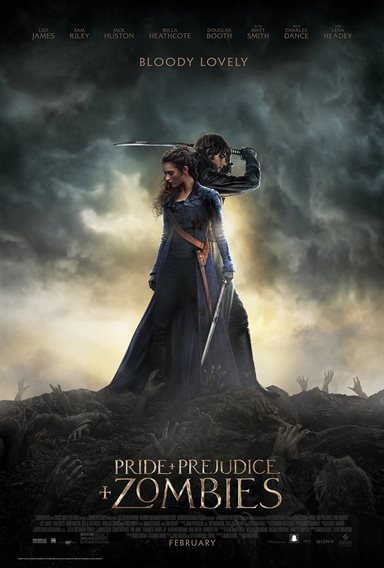 Author Seth Grahame-Smith's work came to the attention of modern movie-goers with the 2012 release Abraham Lincoln: Vampire Hunter, based upon his book of the same name. Now, in 2016, after a couple of years of being in production with several different directors and leading ladies, his New York Times bestselling novel Pride and Prejudice and Zombies makes its way to the silver screen.

If your a fan of the original Jane Austin book, the story should sound familiar (with a little twist that is). A zombie outbreak has fallen upon the land of England. So much so that young adults are taken to China or Japan to learn training on how to beat this scourge if it ever appears on their front door. Even though this zombie "plague" has overrun the country, not all of society has been lost. There are still the have's and have not's, as well as ones that value pride over anything else.

Originally slated as a Natalie Portman action vehicle with  David O. Russell directing, both bowed out due to scheduling conflicts (Portman stayed on as producer). After a few more directors and leading ladies were thrown into the mix, production started starring Lily James (Downton Abbey) and  Burr Steers (Charlie St. Cloud) as the director.

Normally, a film with such troubling pre-production usually points to a very bad finished product. However, Pride and Prejudice and Zombies actually succeeds at being quite entertaining. The main cast, comprised of James, Sam Riley (Maleficent), Matt Smith (Doctor Who), Douglas Booth (Jupiter Ascending), and Bella Heathcote (Dark Shadows), are all great in their roles. You can tell there is great chemistry between the actors and they approached the material with great enthusiasm. James is comfortable in the role of Elizabeth Bennet and appears born to play the zombie hunting version of this classic character.

Steers also provided his own unique tone to the film, adding some great comic relief to a horror/action film: however,  the studio directive of keeping it PG-13/kid friendly, as well as the sloppy editing of Padraic McKinley (Kingdom), will certainly contribute to this film not becoming a cult hit.

Through various interviews with FlickDirect, the cast and crew mentioned how hard they trained for stunts and sword work for the film. However, with all the quick cuts and "family friendly" fighting, the film falls flat and feels fake instead of having audiences members become fully vested in the film.  It's a shame because, with material like this, there could have been so much more depth and action than what ultimately ended up in the movie.

Pride and Prejudice and Zombies is a slick, quirky action/comedy/drama that certainly had the potential to be the first of 2016s great action films. If you accept the film for what it is, it is quite enjoyable. However, the mindset of its producers to make "childlike" fare (think Buffy The Vampire Slayer in corsets), and not create a true vision of Zombie mayhem in turn of the century England, makes this film forgettable after you leave the theater.

For more information about the making of Pride and Prejudice and Zombies, read our Comic-Con interview with the cast and crew, and watch our interview with Lily James, Matt Smith, and Douglas Booth below.