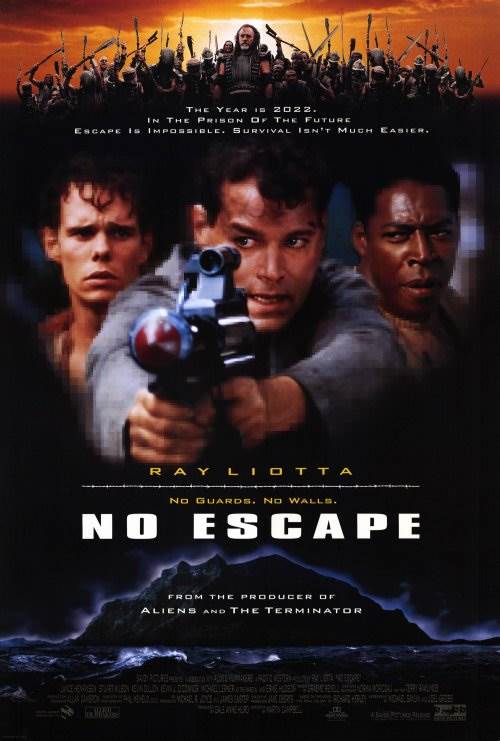 Captain J.T. Robbins is sentenced to prison for the assassination of his general officer, a prison where you only leave in a body bag. "Absolom," is where the worst prisoners are free to create an isolated barbaric society, and where the strongest men rule... a living Hell.

Stream No Escape in Digital HD/4K from the AppleTV store.

No Escape images are © Savoy Pictures. All Rights Reserved. 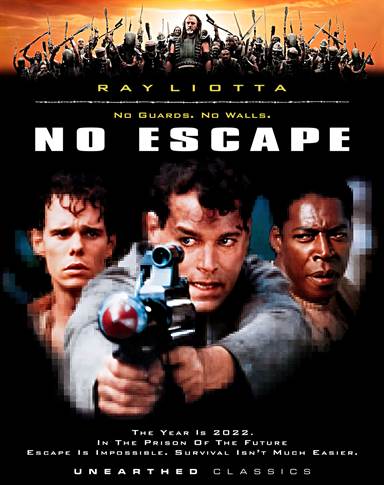 The year is 2022 (yes in real life and in the movie) and in a fictitious world corporations run the penal system…they do in real life as well but not to the same extent.  Regardless, those who are considered the worst criminals eventually find themselves at a level 6 maximum security prison and once there, the worst of the worst get stranded on an island called Absolom where chaos reigns and nobody ever leaves.  Back in 1994, this scenario was the plot of the movie, No Escape, starring Ray Liotta (Goodfellas).  Now, thanks to Unearthed Films and MVD Entertainment Group, audiences can enjoy this title in their homes.

Captain J.T. Robbins (Liotta) has already escaped twice from Level 5 security prisons after killing his commanding officer.  When he is sent to a level 6 security facility the warden (Michael Lerner, Elf) singles him out and “lays down the law”.  However, Robbins isn’t interested in unfollowing orders and lets the warden know that, making him a prime target for the warden’s wrath.  After Robbins acts out he is sent to “the island” where nobody escapes.  Once there, he is kidnapped by the Outsiders but manages to escape, a feat nobody has ever done before.  He is then picked up by the insiders, who live peacefully and work together resigned to the fact that they will die on the island.

While not as compelling as his role in Goodfellas, Liotta manages to give Robbins layers.  On the outside he is a tough guy, straightforward and no-nonsense, right below that is his humor and deep below, kept hidden are the demons that haunt him and that caused him to commit murder. The leader of the Outsiders, Marek, is played by Stuart Wilson (The Mask of Zorro) and he commands attention every time he is on screen.  Lance Henriksen (Aliens) who plays The Father, the leader of the Insiders, also has a great screen presence while exuding an air of peacefulness.

This updated release offers viewers a solid 1080p resolution with a 2.40:1 aspect ratio.  However, coming from a lower-quality master the visuals tend to be hit or miss. Some of the darker scenes come across as a little bit grainy but other shots, especially the overviews of the island have depth and detail, making them striking.

The DTS-HD Master Audio 5.1 is an excellent upgrade.  Ambient noises make good use of the side and rear channels while the dialogue is mostly present upfront.  Jungle sounds give the audio some richness and the score is prevalent throughout.  The extras are minimal as there is only the Blu-ray disc enclosed in the case without a digital download code. There are three new extras which consist of individual audio interviews with producer Gale Anne Hurd (Terminator), director Martin Campbell (GoldenEye), and co-writer Joel Gross (As the World Turns).  The rest of the extras have been previously released.  The extras are Welcome to the Future: The Sci-Fi Worlds of Gale Anne Hurd, Survival of the Fittest: Directing No Escape, Penal Colony: Writing No Escape, Alternate Intro, Making of Escape from Absolom, Vintage Featurette, and the Promotional Gallery.

If you enjoy a good action film, No Escape has much to offer but the plot is a little thin and recycled so if you expect something original or unique, you will be disappointed. In this movie, Liotta reminded us why he was a sought-after actor and his costars give strong performances as well.

If you remember this movie from 1994, you will be pleased with the upgrades and new extras.  If you are just discovering No Escape, rest assured it is a solid entry into the action genre.