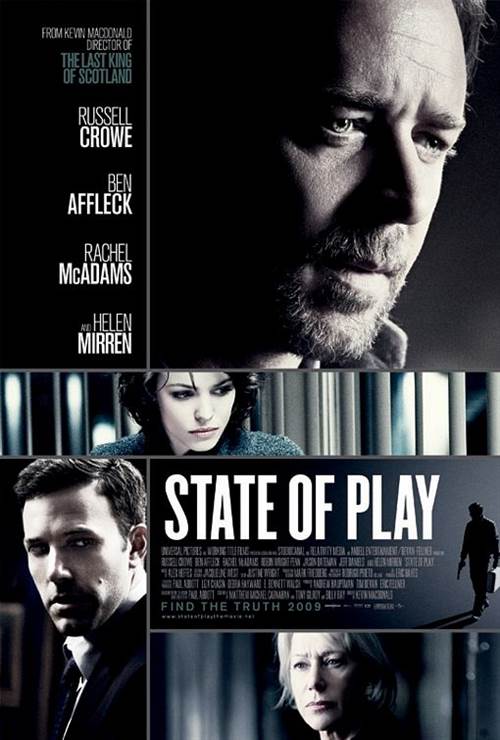 Oscar winner Russell Crowe leads an all-star cast in a blistering thriller about a rising congressman and an investigative journalist embroiled in an case of seemingly unrelated, brutal murders. Crowe plays D.C. reporter Cal McCaffrey, whose street smarts lead him to untangle a mystery of murder and collusion among some of the nation’s most promising political and corporate figures in State of Play, from acclaimed director Kevin Macdonald (The Last King of Scotland).

Handsome, unflappable U.S. Congressman Stephen Collins (Ben Affleck) is the future of his political party: an honorable appointee who serves as the chairman of a committee overseeing defense spending. All eyes are upon the rising star to be his party’s contender for the upcoming presidential race. Until his research assistant/mistress is brutally murdered and buried secrets come tumbling out.

Download State of Play in Digital HD/4K from the iTunes store.

State of Play images are © Universal Pictures. All Rights Reserved. 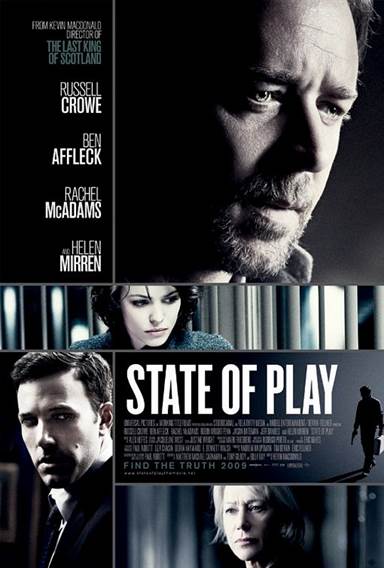 "Message movies" (like Stop Loss or Lions for Lambs) have a particular formula.  They set up the victim for badness, but they must be sufficiently likable and innocent to be outrageous.  They must educate the viewer with both expository historical data and the specific in-your-face incident of the movie.  They must end poorly or ambiguously in order to motivate the viewer to 'do something'.  That is a message-movie, and it is a good thing for State of Play that it is not one.

It does, however, play a bit like one; and I did like that.  In State of Play, a congressman (Ben Affleck) is friends with an elder distinguished journalist (Russell Crowe); they have been buddies since college and have kept in contact through the years.  When the congressman, while sitting on a powerful panel to determine if a Blackwater-like private mercenary company will get a mega-bucks contract, is suddenly exposed as having been in an illicit extra-marital affair with a young aide, the congressman is surprisingly killed in an apparent suicide, and Affleck turns to Crowe for help.   Although, he doesn't think it was suicide, and does have private proof that it might not have been.

Crowe starts looking into things with cub-reporter (actually a young, popular blogger) Rachel McAdams, who differs with him on their take on the news itself, as well as technique.  The movie touches on the very timely and interesting relationship between the new media and the old guard.  It is not a deep examination, unfortunately; I am interested in this interplay and had hoped to learn something (bloggers deal in an almost hourly news-cycle with the lowered reliability you would expect; newspapers are strictly 24 hours or longer, but have higher expected standards).  It is a nice touch, though, in a movie which has quite a bit going on.  Finally, I would be remiss if I missed the scene-stealing Helen Mirren who plays the newspaper's tough-as-nails editor and has to choose between her new corporate masters and her journalistic ethics.

As to the meat of State of Play, without giving too much away, I think I can safely say there is a cadence to these movies.  We get to see the characters have their own moments --fragments of their personal lives spliced into the plot, so we can connect with them.  Crowe does this effortlessly, projecting a sense of who he is supposed to be almost by look alone He is heavy and long-haired, and we know he has seen a lot and is discouraged by most of it.  Then there is the investigation --clues enfold, and the audience has to keep up with the characters to understand what is happening.

State of Play shines in this regard -- the investigation does not, for the most part, rely on a subject having an unusual one-of-a-kind shoe or people being in the right place (accidentally) at the right time.  To me, the journalism seems to be solid; and where the characters catch a break, which they do, it seems reasonably organic to the plot.  Finally, there is the climax and the revealing of each hidden agenda.  State ramps up the tension with excellent use of the score and gives us brooding Washington D.C. night-shots that carry the gravity of the piece.

Between Crowe and Affleck, there is sufficient star power to give the characters the necessary power their roles demand; and for the larger, more impressive Crowe to play the reporter is a good move.  The original choice, Brad Pitt, would, to my mind, not have carried it as well.  The character does well as a solid bearish specimen against the leaner, cleaner-cut statesman that Affleck plays.

By the time the movie is over, I think most viewers will be satisfied enough to sit through the closing video which not only contains the credits, but a fascinating look at how newspapers get printed and distributed.  For a movie with journalism at its heart, this was a fitting capstone.

Is State of Play a message movie?  I don't think so.  It asks some questions about whether people who do good things and bad things balance out in the end.  It might ask for our sympathy in some places, but it never manipulates to get it.  For a movie with investigation as its driving force, the pacing is brisk and smart.  The characters, down to the supporting roles are ultimately believable.  It is a shining example of genre that I haven't seen done so well in quite a while.