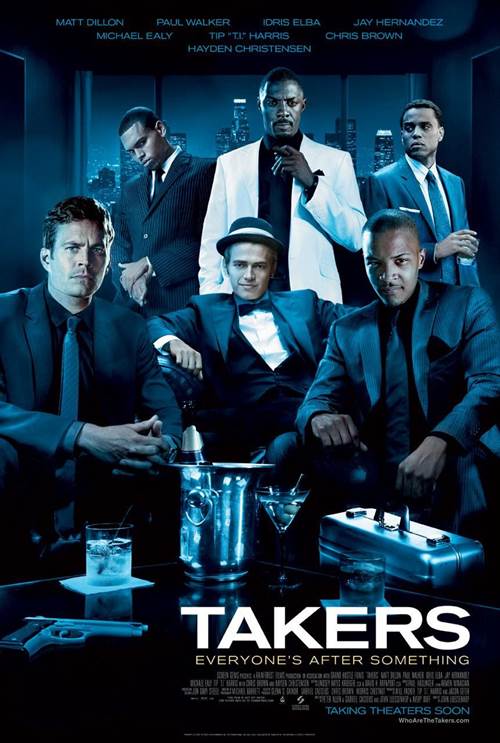 TAKERS takes you into the world of a notorious group of criminals (Idris Elba, Paul Walker, T.I., Chris Brown, Hayden Christensen and Michael Ealy) who continue to baffle police by pulling off perfectly executed bank robberies. They are in and out like clockwork, leaving no evidence behind and laying low between heists. But when they attempt to pull off one last job with more money at stake than ever before, the crew may find their plans interrupted by a hardened detective (Matt Dillon) who is hell-bent on solving the case.

Stream Takers in Digital HD/4K from the AppleTV store. 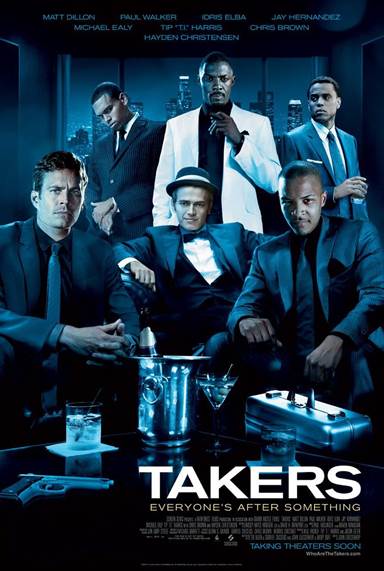 Forever may he be cursed.  You might not even notice, but Hayden Christensen (Star Wars: Episode II, Jumper) joins a crew mostly of his thespian superiors for Takers, a film that begins as a competently executed heist flick, and turns into something quite other than that.

The trouble with all heist films is that we're expected to view the protagonists, thieves, as just that — the protagonists, in role-reversal though they may be — and, moreover, to root for them over the "bad guys", the sorts who are trying to stop the theft.  Such a film might make the thieves' relationship with "the law" more complicated, as in Out of Sight, pit the "bad guys" against badder guys, as in the newer Ocean's films, or even cast the thieves as genuine protectors of the public good, as in Leverage.  Takers elects the well-traveled road of "petting the dog", showing the thieves are quite nice guys, helping and supporting friends and family, outside all the stealing.

Gordon Jennings (Idris Elba, The Wire, The Losers) is saddled with the most cloying of these "pet the dog" moments, and rightly so, because as usual Elba stands out in making the best of both great and poor story choices.  I'm not clear on the command structure of the band of thieves — it seems to operate by consensus — but Jennings always seemed to be in charge, simply because he had the gravitas to make it so.

The remainder of the cast seems to stand up well — Ghost (T.I., ATL, American Gangster) in particular pulls off his counterpoint to Jennings near-perfectly — and, had the film ended with the heist, perhaps with the parkour sequence shifted a little earlier, Takers would be an unpretending show with much to recommend it.  That is not where it ends, though.

We reach a scene that, more than any other in the film, demands the greatest pathos of the actor in its focus.  Naturally, we turn the reins over to Matt Dillon (Wild Things, Crash), who is probably the least capable of such a thing, with the possible exception of Christensen.  Lonely was the soul in the cinema who didn't think the whole situation was a mockery of good drama.

There is no justice in the world, but there can be justice in film, so Takers in its later acts becomes bent on digging up the flaws in its characters, so carefully papered over in the run-up to the heist, and punishing them for it.  These scenes of karmic punishment are designed and filmed in a way that can best be described as lovingly, or perhaps borderline fetishistic.  There is a book of life for these characters, and Takers leaves no page unturned in its quest to root out and avenge their misdeeds, whether on the side of good or bad.  It is best, perhaps, that there be no sense in the selection of those just spared the wrath of the movie gods in the ending.