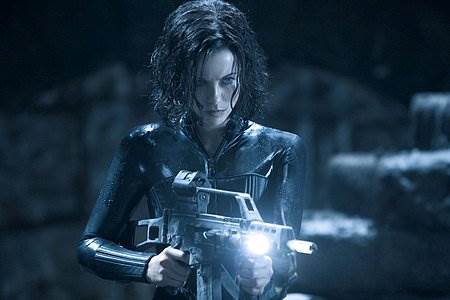 As the feud between vampires and werewolves escalates to new heights, so too does Underworld Evolution, delivering a veritable feast of bloodthirsty power, forbidden love and sweeping vengeance.

With the exposure of well-kept secrets and the tough resolve of one betrayed Vampire warrior, a centuries-long struggle between vicious predators has reached new heights of fierceness. But it’s one Immortal’s insatiable lust for power that leads to disturbing new disclosures about the origins of the feud between the Vampires and the Lycans.

The past just got very twisted, and the future may reveal an entirely new breed, the likes of which no one has ever seen.

The Underworld saga continues as hunted Vampire Selene (Kate Beckinsale) seeks out Marcus (Tony Curran), king of the Vampires, in the hope of bargaining for her life. Hybrid Michael (Scott Speedman) wants to join Selene in her quest but is unable to trust the werewolf raging uncontrolled inside him, and she refuses his companionship. Their love proves more powerful than genetics, however, when Marcus descends upon Selene, intent on annihilating her. In the battle that ensues, Selene discovers that she has been betrayed by her own family and she sets out to seek her revenge.

Selene seeks out Adrian Tanis (Steven Mackintosh), official Historian of the Covens, for help unraveling the web of lies spun by Marcus and Viktor (Bill Nighy) in their battle for supremacy. Intrigue deepens when Tanis reveals the identity of the first true Immortal: not Marcus or Viktor as was believed, but Alexander Corvinus (Derek Jacobi), father to Marcus and his twin brother, William. Corvinus, like an omnipresent god on the fringes, has been tracking everyone’s movements and cleaning up after their wars, intent on keeping his descendents confined to the shadows of human society.

Side by side, Selene and Michael battle the horrifically strong and determined Marcus, who is determined to release his imprisoned brother William from captivity and use his bloodlust to achieve world domination. Each confrontation unearths new revelations, casting a harsh light on previous events and cutting through the darkness of painful memories buried deep within.

Kate Beckinsale (The Aviator, Van Helsing) and Scott Speedman (The 24th Day, My Life Without Me) reprise their roles in this exhilarating sequel, which sends the Underworld legend to the next terrifying stage, unleashing, new action, new secrets and an entirely new breed that is more powerful than any of them.

Stream Underworld Evolution in Digital HD/4K from the AppleTV store.