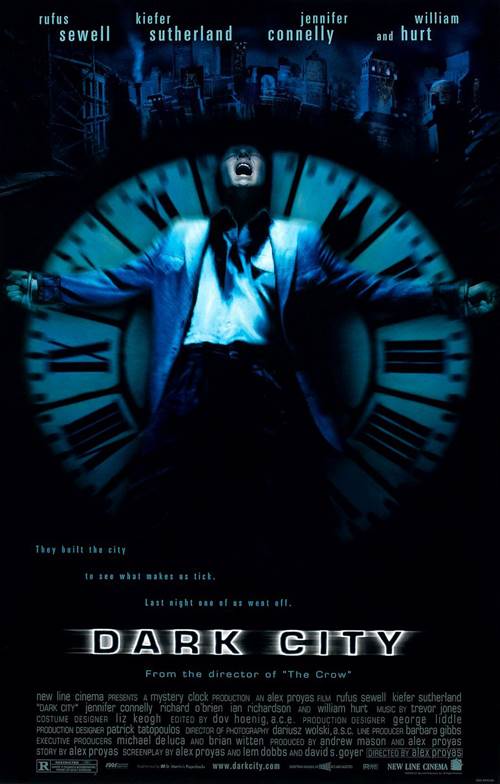 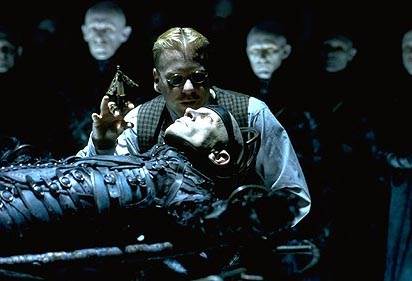 John Murdoch (Sewell) awakens alone in a strange hotel to find that he is wanted for a series of brutal murders. The problem is that he can't remember whether he committed the murders or not. In fact, most of his memories have completely vanished, and for one brief moment, he is convinced that he has gone stark raving mad.

Pursued by Detective Bumstead (Hurt), Murdoch seeks to unravel the twisted riddle of his identity. As he edges closer to solving the mystery, he stumbles upon a fiendish underworld controlled by a group of ominous beings collectively known as The Strangers. These shadow-like figures possess the ability to stop time and alter people's perceptions -- a process known as Tuning. Through an evolutionary anomaly, Murdoch is also imbued with this power and thus, he alone is able to resist The Stangers' control over his mind.

And for that, he must be destroyed.

With the help of the inscrutable Doctor Schreber (Sutherland), Murdoch is able to stay a step ahead of his adversaries while he slowly pieces together the labyrinthine puzzle of his past -- his bittersweet childhood, his love for his estranged wife Emma (Connelly) and the key to a hideous series of murders which he is suspected of committing. Dark City is produced by Andrew Mason and Alex Proyas. Based on a story by Alex Proyas, the screenplay is by Alex Proyas and Lem Dobbs (Kafka) and David S. Goyer (The Crow 2). The film is directed by Alex Proyas.

Stream Dark City in Digital HD/4K from the AppleTV store.


Dark City Series in the Works  8/13/2021 2:58 PM EST
Alex Proyas, who directed "Dark City", will be featured at the Popcorn Frights Film Festival this year with his short film "Mask of the Evil Apparition". The 20-minute short is about "A young woman with no memory searches a deserted nocturnal city looking for something or someone. The only problem is she can't remember who or what. She encounters twin brothers who may be her salvation, but one of ...  More>>