Murphy is a one-man show backed up by his supporting cast – especially Reinhold and Ashton – who allow Murphy the freedom to do what he does best. 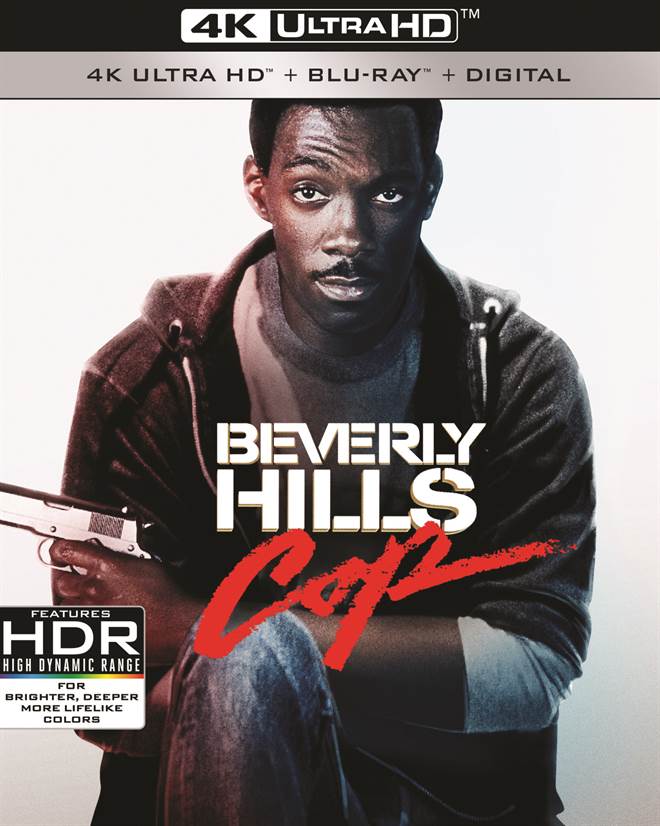 Eddie Murphy (Dolemite Is My Name) was a stand-up comedian who became a household name in 1980 thanks to his weekly appearances on NBC's longtime comedy sketch show, Saturday Night Live (SNL).  With characters like Adult Buckwheat, Mr. Robinson (a play on Mr. Rogers), and a life-size Gumby, he is credited with helping to reinvigorate SNL whose ratings were falling prior to his arrival.  Flagged as a standout amongst a talented group of comedians, Murphy was destined for greater things and his success increased in 1982 with his first feature film release, 48 Hrs., which also starred Nick Nolte (The Prince of Tides).

One year later Murphy had another hit alongside fellow SNL alumnus Dan Aykroyd (Ghostbusters) when Trading Places made its way to movie theaters.  Already on a career-high, Murphy next portrayed one of his most famous characters to date, Axel Foley, in the film Beverly Hills Cop.  The movie went on to become the highest-grossing film in the United States in 1984 and, in turn, spawned two sequels, both of which saw Murphy reprise his role.  Paramount Pictures has restored the original Beverly Hills Cop and is releasing it this week on 4K UHD.

Axel Foley is a Detroit police detective who tends to skirt authority and rarely follows the rules.  When his unauthorized sting operation gets interrupted by two uniformed officers, a city-wide chase occurs causing millions of dollars in damages and, once again, lands Foley in hot water with his boss.  When Foley arrives home later, he sees his apartment has been broken into by his childhood friend Mikey (Django Unchained) who shows Axel some German bearer bonds he obtained.  Knowing Mikey has a criminal past, Axel doesn't question Mikey about the bonds. Later that evening, they get jumped and while Axel is knocked out cold, Mikey is murdered.

Under the guise of taking a vacation, Axel heads to California (where Mikey had been living) to see if he could find out more about the bonds and who killed his friend.  Once again, while not following the rules, Foley is arrested for trespassing. He then discovers two Beverly Hills detectives have been assigned to follow him to make sure Foley doesn't cause any more trouble.  While the pair (played by Judge Reinhold; Fast Times at Ridgemont High and John Ashton; Midnight Run) immediately dislike Foley because he is unorthodox in his methods, the three eventually form a mutual respect and the Beverly Hills Detectives end up finding out who killed him and why Mikey was murdered.

Some consider Axel Murphy one of Murphy's best roles ever (until Dolemite is My Name was released in 2019).  He is smooth, fast-talking, and unapologetic for his mistakes (since he rarely sees them as mistakes).  Murphy is a one-man show backed up by his supporting cast – especially Reinhold and Ashton – who allow Murphy the freedom to do what he does best.  Ronny Cox (Total Recall) also has some great scenes with Murphy while portraying Lt. Bogomil.

While celebrating Eddie Murphy's work this month (in anticipation of next year's Coming 2 America release), Paramount decided to offer Beverly Hills Cop in 4K UHD.  The transfer began over a year ago when Paramount decided to release the Beverly Hills Cop trilogy in a Blu-ray set and while the quality was better, it is nothing compared to what is seen on this new disc.  Sharp details and vibrant colors fill the screen with little to no discernable noise.  The DTS-HD Master Audio 5.1 is the same track used before for this film so, while it is good quality, it doesn't equate to the video.  The pack comes with the 4K disc, Blu-ray disc, and digital HD.  Sadly, there are no new extras as all of the ones in this set were previously released.

Beverly Hills Cop is the perfect example of Murphy doing what he does best from back in his heyday.  Interestingly, even though the movie is almost thirty years old, the jokes, action sequences, and dialogue manage to hold up well, even if the fashion does not.

For more information about Beverly Hills Cop visit the FlickDirect Movie Database. This release has been provided to FlickDirect for review purposes. For more reviews by Allison Rose please click here.

Allison Rose
The combo pack is a great way for fans to enjoy all of the films, and Murphy’s performances, from the comfort of their own homes.
Full Review | Grade: B