The Fifth Estate suffers with scattershot direction, slippery scripting and hit or miss casting, with Cumberbatch doing his best but succumbing to a mediocre screenplay and Condon's wishy washy vision. 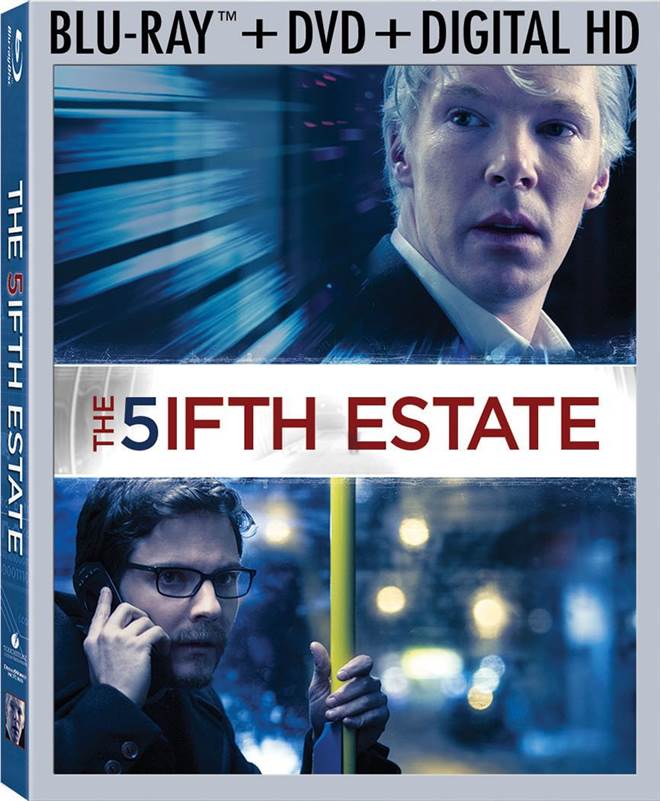 Purchase   DVD/Blu-ray/4K UHD
Bill Condon's The Fifth Estate is a strangely groggy, awkwardly generic Julian Assange biopic; a made-for-TV-quality misfire with aspirations of Social Network greatness destined instead to share bargain bin real estate with the likes of Swordfish and Antitrust. Benedict Cumberbatch is miscast as a stringy haired, marble mouthed Assange... or perhaps just underutilized, mismanaged or the victim of indecisive editing. (Cumberbatch isn't sure who Assange is, having admittedly changed his position on the WikiLeaks founder numerous times over the course of the production. But Assange knows who Assange is; a conflict between character and actor that leads to an uncharacteristically discordant performance from the typically reliable Cumberbatch.) Either way, discredit where discredit's due: a sporadic screenplay and Condon's uncertain direction. The Fifth Estate isn't sure what it wants to be, much less who it wants to focus on or how it wants to hack its way through its hydra-headed story. By film's end, Condon and company shrug their shoulders, extend their middle fingers at an already beleaguered audience and hide behind a faux interview with Assange, who says "if you want to know the truth, no one is going to tell you the truth. They're only going to tell you their version. If you want the truth, you have to seek it out for yourself."

Based on "WikiLeaks: My Time with Julian Assange and the World's Most Dangerous Website" by Daniel Domscheit-Berg and "WikiLeaks: Inside Julian Assange's War on Secrecy" by Guardian journalists David Leigh and Luke Harding, The Fifth Estate follows the Machiavellian rise of WikiLeaks founder to the global media stage and the events surrounding the controversial 2010 release of 90,000 classified U.S. documents (the Afghan War Logs), 400,000 classified U.S. military reports (the Iraq War Logs) and more than 250,000 U.S. State Department cables. The bulk of the film is built around Assange's three-year partnership with Domscheit-Berg (Daniel Brühl), who joins Assange's team-of-one in 2007. At first, it's all roses. Assange and Berg changing the world. Soon, though, Berg watches as Assange's ego, pride and jealousy take control and turn the brilliant hacker into an international threat. Berg insists releasing hundreds of thousands of pieces of sensitive materials -- without proper redaction -- could put people's lives in danger. Assange insists the truth takes precedence. Playing exasperated referee is the traditional media, represented by The Guardian editor Alan Rusbridger (Peter Capaldi) and journalist Nick Davies (David Thewlis). Playing the role of panicking U.S. government officials is White House staffer Sam Coulson (Anthony Mackie), undersecretary Sarah Shaw (Laura Linney) and her colleague James Boswell (Stanley Tucci). Playing them all, of course, is Assange, who Cumberbatch injects with delirious brilliance and frightening childishness.

Cumberbatch and Brühl try their damnedest to mine the material for moments of honesty or insight, but the script never lives up to the real-life drama behind the story. Stilted and contrived, their dialogue is peppered with exposition, redundancy, over-acting and cutaway reaction shots; eye rolls and nose pinches, sneers and pursed lips; the kind of takes that usually wind up on the cutting room floor. The Fifth Estate is far more obvious than it thinks, moving with the labored burden of a behemoth struggling to take each step. Even Condon's attempt to visualize WikiLeaks' artificial online world falls flat, imagining a room of paper-laden desks manned by dozens of Assanges. We're meant to be torn between the potential good of Assange's intentions and the potential harm of his impulse. After all, the Libyan informant is just one of thousands whose lives are possibly being put at risk. But, once again, the particulars -- the storytelling, pacing, camerawork, music... all the fundamentals -- are so telegraphed, so obvious, that these scenes of intense human theater fail to make much of an impact.

The Fifth Estate features a fit and faithful 1080p/AVC-encoded video presentation that rarely stumbles. Edges are crisp and clean (with only a hint of intermittent ringing) and textures are revealing and well-resolved. All told, it's a terrific presentation sure to please anyone who warms to the film. Disney's DTS-HD Master Audio 5.1 surround track is competent and capable, without any real issues to point to. Dialogue is clear, intelligible and neatly prioritized, and effects are clean and convincingly grounded in the mix.

Special Features:The Fifth Estate suffers with scattershot direction, slippery scripting and hit or miss casting, with Cumberbatch doing his best but succumbing to a mediocre screenplay and Condon's wishy washy vision. There are moments where Estate shows tremendous promise, but they're sadly few and far between. Disney's Blu-ray release is much better, with an excellent video presentation, strong DTS-HD Master Audio 5.1 surround track and a decent (albeit short) supplemental package. There's potential for a sharper WikiLeaks film buried deep within The Fifth Estate. But with Assange's 15-minutes of fame fading fast, the question is whether anyone will care to watch the next Assange biopic if one is even greenlit.

For more information about The Fifth Estate visit the FlickDirect Movie Database. This release has been provided to FlickDirect for review purposes. For more reviews by Chris Rebholz please click here.

The Fifth Estate images are © DreamWorks Studios. All Rights Reserved.