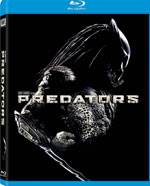 Purchase   DVD/Blu-ray/4K UHD
In 1987, a new science fiction/action franchise was born by John McTiernan(Die Hard), starring Arnold Schwarzenegger (Terminator, True Lies), Carl Weathers (Rocky), Jesse Ventura (The Running Man), and Bill Duke (Commando).  The film went on to spawn a direct sequel and two spin-off films.
Now, 23 years later, writer/producer, Robert Rodriguez (Desperado, From Dusk Till Dawn) and director, Nimród Antal (Vacancy, Armored) bring the series closer to the original with the film Predators.  Predators has an ensemble cast of Adrien Brody(King Kong, Splice), Laurence Fishburne (The Matrix), Topher Grace (Spider-man 3), Alice Braga (Repo Man, The Rite), Walton Goggins (Cowboys & Aliens), Danny Trejo(Machete, Heat), Mahershalalhashbaz Ali (The 4400),  and Oleg Taktarov (Miami Vice).
Even though Predators is the fifth film to involve the Predator character, this film discards all sequels and makes the premise quite simple -- instead of the Predator hunting human beings on earth, they bring the best human "predators" to an alien planet to be their prey.
Development of Predators stems back to 1994 when Robert Rodriguez was approached to write a Predator sequel treatment; however Fox did not green light the project until 2009 when the technology needed was finally at a point where it would provide a relatively inexpensive way to bring the film to the screen.
If ever asked to provide a review of Predators in two words, it would be that it is "simply amazing". Predators brings the series back on track by providing parallels to the original, but also venturing in new directions (such as the 4 different types of Predators seen in the film).  Even though the muscle-bound heroes of the original Predator film are now gone, you can still believe that the characters kidnapped to this alien world are all formidable opponents for the predators.
The Blu-ray edition of Predators is one of 20th Century Foxes best productions to date. The shadows and highlights of the jungle are color matched to perfection, while the soundtrack packs a great punch for all the special effects mixed with the great soundtrack by John Debney.
It sometimes feels that Blu-ray's get the raw deal when it comes to special features, however, this is not the case with Predators. The Blu-ray boats Predator motion comics, and behind-the-scenes-features (some exclusive to Blu-ray only), deleted scenes, and a digital copy of the film.
If you are a fan of the original film and have been disappointed in the sequels, then Predators is a must see for you.  If you have already seen the film, then chances are you know what I am talking about; and Predators Blu-ray would be a great addition to your home entertainment library.
Cast:
Directed By:
MPAA Rating: R

For more information about Predators visit the FlickDirect Movie Database. This release has been provided to FlickDirect for review purposes. For more reviews by Nathan M Rose please click here.

Stephen Compall
Do you realize how great things are now? No longer are we bound by the conventions of cinema to listen to Jesse Ventura wax metaphor on his sexual prowess. The adhocracy of special effects devices has been banished in favor of computers, and shall ever be unmourned. The false camaraderie of impossib...
Full Review | Grade: C