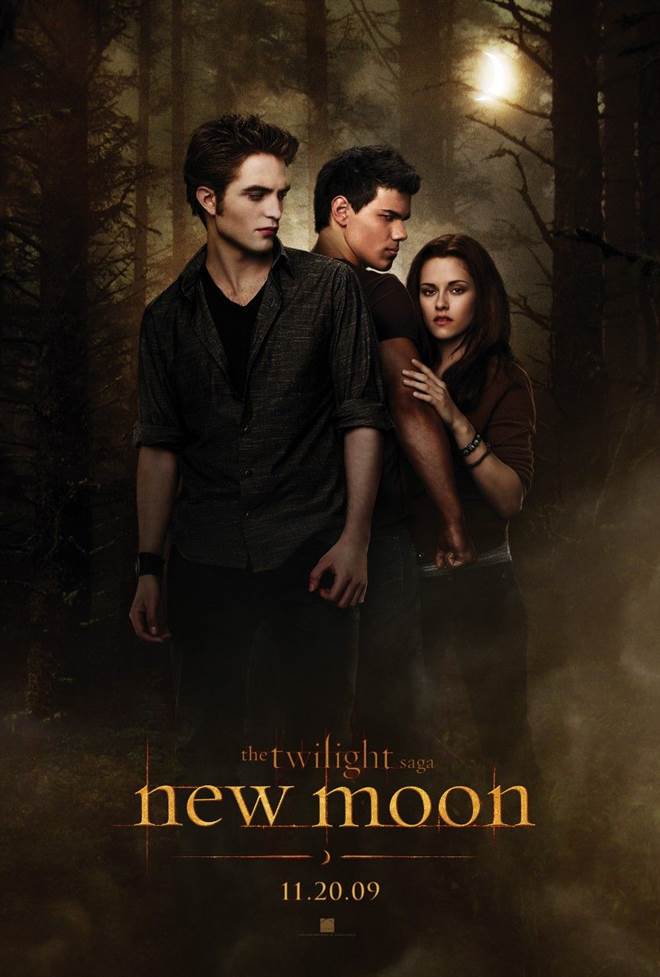 Purchase   DVD/Blu-ray/4K UHD
New Moon is one of those movies for which the plot is almost superfluous. If you are a fan of Twilight, you more or less know it. If you are not, you probably do not care.  However, for form's sake, I will sum it up.

New Moon comes in as the second installment in the Twilight, the Stephanie Meyer series. It is about a love affair between a vampire, Edward Cullen, played by Robert Pattinson and a human high school student, Bella, Kristen Stewart.  In the first movie, she discovered Cullen's secret that he is a vampire; and they fell in love.  In this installment, after she gets a paper cut at a birthday party and Cullen's vampire-family almost kills her, he goes into self-imposed exile, breaks her heart, and leaves her with the super-built-up Jacob Black, Taylor Lautner, with 26 added pounds of muscle that he put on trying to reprise his role from the first movie. He turns out to be a werewolf -- the natural enemy of the vampire.

As Bella pines for Edward, she keeps the love-struck Jacob around because, (a) he is totally into her, and (b) she has discovered that adrenaline rushes give her a psychic connection to Edwards. She likes doing dangerous things like cliff diving and racing dirt-bikes.  In the meantime, angry vampress, Victoria (from the first movie) makes recurring raids on the town trying to find and kill Bella. She is chased by the werewolf pack while Cullen decides that if she dies he will kill himself.

Finally something happens to make him think she died, and she actually almost does. Things come to a head as she tries to stop him from killing himself like Romen as he does not want to live without her.  It is meant to be very romantic in a decidedly gothic sort of way, and I suppose it is.

Before we get to spoiler territory and commentary, let me weigh in with this.  It appears that the problem with Twilight and New Moon (in particular) is not that it is bad.  It is not stupid or artless.  There is a scene where the super fast wolves are chasing the vampire, who is also super fast). We see them moving at normal sprinting speeds at the same time a bird seen from overhead moves with a wing-flap every few seconds.  Then it speeds up to 'real-time' with a kinetic blur of motion.  This is very good stuff, but there is a battle at the end where two super-fast vampires fight each other; we get sort of a into-and-out-of-bullet-time battle in which Cullen (who is a tough, if average vampire) gets to fight a bad-ass personal guardian of vampire aristocracy who, rightly, dominates him. The movie also gets that right; and after watching a lot of these types of things, that is not necessarily an easy thing to do.

If you are a fan, the problem with Twilight is that it is hugely self-indulgent. Bella mistreats her friends, but they all still love her.  The vampires, rather than being dark and dangerous, are all sparkly.  The love affair is painfully chaste with each of them pining for the other in a whirlwind of angst. Is it coincidence that the class lecture is Romeo and Juliet -- of course not.  How far does the movie have to go in order to ensure that two sets of monsters will battle over Bella's heart -- even as both vie for the right to stand guard over her -- not very far at all.  So far, this is a series that caters lovingly to its protagonist -- who, it is alleged, is a stand-in for author, Stephanie Meyer; and to my eye, seems like one.

Bella is the luckiest girl in the world. Her father is bewildered by her angst and depression, but never loses his patience with her. When she demands no presents for her birthday, of course she is showered with gifts.  When she decides after a lengthy exile to sit at the lunch table with the un-cool kids -- the uber-cool kids, the Cullens, have left town -- they immediately accept her back; and she gets a date instantly, although she does not necessarily want one. The poor kid who asked her out gets taken to an action flick since she wants an adrenaline rush and winds up throwing up in the bathroom ... before being almost mauled by Jacob.


The movie plays like a drama-laden, 14-year-old's dream relationship and seems to me as all desert and no dinner.  In my mind, it does nothing to earn any loyalty to its protagonist.  She has everything, and yet she is perpetually miserable -- so let's talk about spoilers.

Spoilers
The movie sets up a love triangle between Jacob who wants Bella and Bella, who wants Cullen. Cullen, wants Bella but is afraid he or his family will kill her -- after all, she is full of tasty blood.  Jacob and Cullen, also being mortal vampire/werewolf enemies, hate each other on the principal of ... I guess ... racism.  Or, possibly Jacob hates the Cullens because vegetarian vampires or not, their kind kill people, and presumably even the noble Cullen-clan has slipped up once in a while.

On the other hand, the movie tells us that sometimes werewolves accidentally kill people too; so maybe we are just back to monsterism.  I can not be sure.

The key thing is that Bella uses Jacob.  It is true that eventually she does tell him there is no chance, but she doesn't want him to stop wanting her because she is selfish. In one sense, this discussion has integrity; she lays out for him that she plans to string him along, and if he is okay with that, she likes it because, let's face it, he doesn't have a chance -- her true love is Edwards.

Instead, this dynamic, confession made Bella the predator in the relationship. She knows he is infatuated with her; knows that she can use him to dull the pain of Edwards having left; knows it will eventually hurt him more and seeks him out relentlessly. Having her acknowledge that she is selfish is one thing, but having her perspective on being selfish be, essentially, validated by the movie is something else.  For me, it was one step of self-indulgence too far.  If the author, and director, and so on, actually does have contempt for the behavior of the protagonist, they certainly do not show it. I believe, since the appeal of Twilight is predicated on the protagonist being wanted and loved by all and the headaches that brings, I simply believe the various authorial voices find this situation to be due Bella.

This left a bad taste in my mouth.

I have a hard time rating this movie because I didn't very much like its take on the subject matter of vampires and werewolves, but I did like how it brought it to us.  I did not like the main character, but I appreciated her performance.  I haven't read the books, but it seems that the creators of the film did a good job with the material.  However, in the end, despite a somewhat slow middle, it held my attention all the way through.  For that, I think I have to give it the benefit of the doubt.

Download The Twilight Saga: New Moon in Digital HD/4K from the iTunes store.

Listen to the The Twilight Saga: New Moon soundtrack on Apple Music.