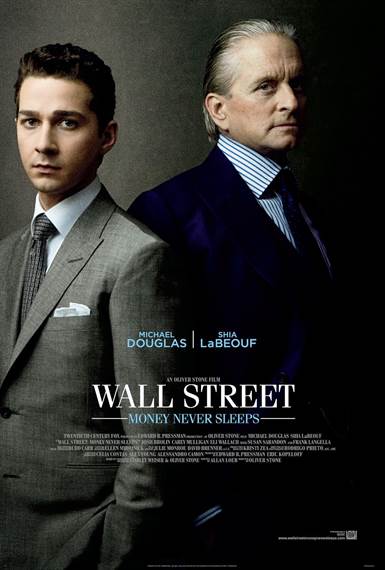 Purchase   DVD/Blu-ray/4K UHD
Back in the 1980's Oliver Stone made a movie called Wall Street which was a social commentary of the way American business operated during that generation. The character of Richard Gekko (Michael Douglas) was a personification of that time and culture. His speech about greed being good perfectly encapsulated the thought process of that decade. Now Oliver Stone has returned with a sequel of sorts starring Shia LeBeouf who is a young go-getter type who happens to be dating Gekko's daughters.

The movie takes place in 2008 and opens with the release of Richard Gekko from prison. Jacob Moore, played by Shia LeBeouf, is a day trader down on Wall Street working for a large banking firm. His main focus is trying to get an alternative energy program off the ground. Louis Zaibel (Frank Langella) is Jacob Moore's mentor, boss and family friend. We find out how he got Jacob the position and also learn that perhaps things aren't all perfect at the home office. The next day when trading opens a surprise turn of events takes place as the stock takes a nose dive and many investors begin to panic. Louis is so taken aback by this that he takes his own life. Now Jacob is left on his own more or less.

Jacob sets out to find out what happened to friend and get retribution in his own way. The other story taking place in this movie is reuniting of Gekko with his daughter Winnie (Carey Mulligan) who has no love for her father. Jacob tries to play both angles by secretly pushing the two of them together while also getting information about the man who is responsible to Lou's death.

The movie itself is very well done. We really get a sense of how business is done down on Wall Street and how simple rumors and speculation can send a strong investment firm plunging into bankruptcy. As always with all of Oliver Stone's movies, this one is a commentary the lives of these types of people while also telling you what he thinks of the government bail out a few years ago. If you don't agree with most of his opinions then you may not like this movie but it would be hard not to when you see how the men and women of this industry treat each other.

As was said earlier the original Wall Street was an example of life in the 1980's. The same can be said for this movie. In a way the two movies are completely different. Gekko's speech about greed being good now no longer works in our culture today. At one point Gekko makes a statement that it's never about being rich, it's about playing the game. Perhaps that's true of businessmen today. They don't really care about having all this money at their finger tips; they just want to destroy one another.

What makes this movie work so well is that you never know who is playing who. Gekko comes off life a man reformed by prison life, but is he really? Does Jacob Moore's new boss really like him or is this just another way for him to toy with someone's life. The one possible down turn for this movie is the ending. It smells a bit of the typical "happy Hollywood ending", where all our main characters get what they want. But seeing how the movie plays out and especially the interaction between Gekko and his daughter, perhaps it's not so typical. Because in the end money will only get you so much in life and the best things are the ones that money will never be able to buy you.