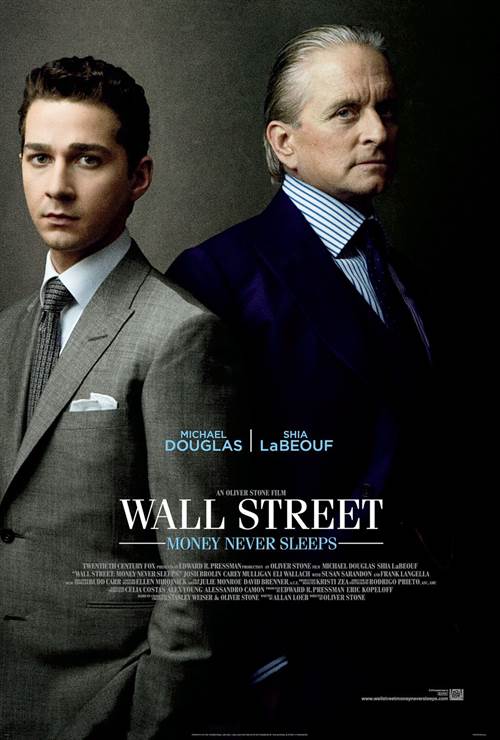 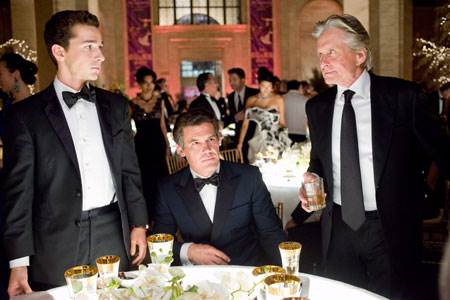 Back in action again following a long prison term, Gordon Gekko (Michael Douglas) finds himself on the outside looking in at a world he once commanded. Ostensibly hoping to repair his broken relationship with his daughter, Gekko forges an alliance with her fiance, Jacob (Shia LaBeouf). Though Jacob comes to view Gekko as a father figure, he learns the hard way that Gekko is still a master manipulator who will stop at nothing to achieve his goals. 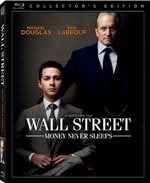 The release of Wall Street: Money Never Sleeps on DVD/Blu-ray brings a lot of good features.  Viewing the film itself in this format and venue allows you to slow down the action, replay a scene that may have been misunderstood and allows you to play it whenever you want.  Well I'm sure you already knew that, but I just wanted to emphasize it due to the nature of this film. Coupled with the outstanding bonus features, this is probably the best buy at your local video store.
It's not often that a good drama comes to the screen that is able to captivate without car chases, murder or action sequences to keep the audience entertained.  Wall Street: Money Never Sleeps puts on a great show that held my attention from the opening scene to the final touching conclusion.
Michael Douglas and Shia LaBeouf in Wall Street: Money Never Sleeps
Coming off an eight-year prison sentence, Gordon Gekko (Michael Douglas) heads back to the world of the stock market of which he was a king pin before getting busted for insider trading.  Gekko's relationship with his daughter Winnie (Carey Mulligan) in shreds, no visible income and only his wits and instincts for the market, Gekko starts calling in favors to find a way up the ladder again.  Up and coming stock trader Jacob (Shia LaBeouf), Gekko's daughter's fiancée, sees a chance to get in league with the former market boss and meets with him.  Together they form a plan for success.  When Gekko takes a stab at redemption for his eight years of losses, Jacob finds out that there is more that meets the eye when it comes to trading stock.
Dramatic acting has to be strong, capture audience attention and deliver believable characters.  Douglas and LaBeouf are amazingly good in their rolls as the two men who hatch a plan with only one winner.  Although at times you can see them fighting each other for domination of the screen, the storyline evens this war as it gets deeper into the attempted redemption phase.
Oliver Stone doesn't do any more than he did in the first Wall Street.  He keeps his characters charming, witty and then devious as they prod along to the interesting ending.  I liked the way Stone spends at least a little time in letting the viewer know some of the mechanisms of the market and how it exists, as most people are unaware of the inner workings.
The most valuable bonus on any DVD/Blu-ray is on Wall Street: Money Never Sleeps.  It's called ‘Money, Money, Money:  The Rise and Fall of Wall Street' and it is filled with commentary on the first Wall Street, the reality of the failed wall street system, the inner workings of the trading system, and even a physical look at Wall Street with historical beginnings to today's New York business district.  This bonus feature is worth the price of the Blu-ray alone.
Other features include deleted and extended scenes, Conversations with Oliver Stone and the cast.  The box also contains a digital copy for on the go movie lovers.