Transformers: Dark of the Moon (2011) Review 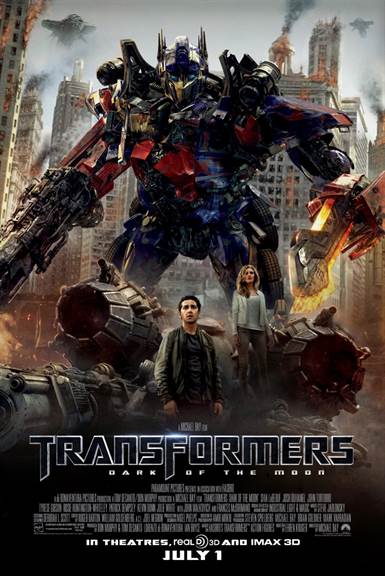 Purchase   DVD/Blu-ray/4K UHD
The phrase, "the third time is a charm" has never held more true than with this years' Paramount and Michael Bay's third Transformer outing: Transformers: Dark Side of The Moon.
Following the events of the first two films, we see Sam Witwicky as a college graduate having a hard time finding a job in society after being put back in civilian life.  He had saved the world twice from the likes of the Megatron and Decepticons.  However, unbeknownst to Sam, the world is in need of saving again as Megatron and the Decepticons have put into motion a plan that will once and for all have them conquer the Autobots and have victory on Cybertron.
Screenwriter Ehren Kruger  is back again to craft the story of our robots in disguise.  However, Kruger's sophomore effort displays a great maturity over the last outing.  Thankfully, jokes about large brass transformer genitals are absent from this story.  The story's plot is less abstract, engaging, and takes cues from our history just as smartly as X-Men: First Class did earlier this summer.  Generation X, Saturday morning cartoon fans will also be happy to note that some elements from their beloved cartoon have worked their way into the plot this time which will most certainly put a smile on even the biggest Transformers fan boy face.
While the acting in the Transformers films has always been secondary to the giant robots and explosions, it appears that this time around, Michael Bay and team have even improved on this aspect of the series.  The core cast has remained the same -- with the exception of missing in action Megan Fox -- the supporting cast of characters has grown to include Patrick Dempsey, Frances McDormand (Raising Arizona, Burn After Reading), Alan Tudyk (Firefly, Dollhouse), and the great humor of Ken Jeong (The Hangover, The Hangover Part II), and John Malkovich (Red, Con Air).  Alas, while Rosie Huntington-Whiteley provided great on-screen eye-candy, her acting was not a vast improvement over Megan Fox.
When Michael Bay is hired to direct a film, studios and audiences have come to expect one crucial element in a film -- action.  This time around though, Michael Bay has outdone even himself.  All of his past work, including Bad Boys II, The Rock, Pearl Harbor, and even the past two Transformers films have prepared him for this -- his most jaw-dropping- film to date. The explosions are larger, the chaos and devastation caused in the film is vast, and the stunts are mind blowing.  Even the series core action problem of not being able to make out the robot fight sequences has even been solved on this third outing.
What finally glues this awe-inspiring popcorn film together is the 3D treatment given to the film.  While 3D has lost some of its glamour this year from a handful of poorly done post-processed effects, Michael Bay gets it right.  Transformers: Dark Side of The Moon was conceived with 3D in mind and shows what the medium can do if used properly and not just for a cash grab.
Not since Independence Day in 1996 has there been a more appropriate movie for the 4th of July weekend here in the United States.  If you have any time this weekend in between barbeque and fireworks, Transformers: Dark Side of The Moon is the must see film to round out your holiday weekend.

Purchase a DVD/Blu-ray/4K UHD physical copy of Transformers: Dark of the Moon today at Amazon.com

Download Transformers: Dark of the Moon in Digital HD/4K from the iTunes store.

Listen to the Transformers: Dark of the Moon soundtrack on Apple Music.

Transformers: Dark of the Moon images are © Paramount Pictures. All Rights Reserved.

Read More Reviews For Transformers: Dark of the Moon