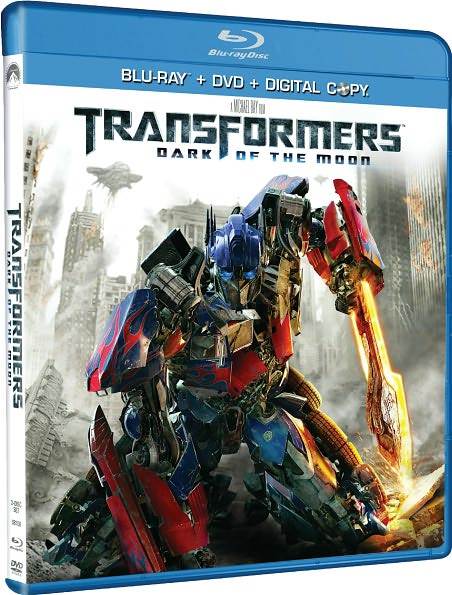 Purchase   DVD/Blu-ray/4K UHD
Backin 2009 I gave the last Transformers film, Transformers 2: Revenge of the Fallen,  a D, and for good reason.  Normally sequels continue to get worse, but occasionally you'll get improvement.  In the case of Transformers, it was much easier to get better than worse.  Set a few years after the Revenge of the Fallen, Sam Witwicky is out of college, has a new girlfriend, and can't get a job because even though the entire planet knows about the robot aliens, he can't discuss the details of what he did to help.  Meanwhile, "surprise!", a new twist is added that was never discussed before: that the Moon race was actually a race to get to a UFO that crashed there, not that far from the Sea of Tranquility.

The general overall story was a refreshing improvement, with a few notable exceptions.  Several elements, however, were not needed.  Sam's parents are back but unlike the last movie, are not essential to any part of the story moving forward.  Sam's new girlfriend, Carly, played by Rosie Huntington-Whiteley, is a key link between Sam and a surprise human antagonist.  Some interactions between Sam and Carly end up being pointless and involve turns in their attitudes that are unexplained, but it is much better than the last movie that seemed to make Sam's romantic relationship more important than it needed to be.  Other than that, there are occasional little items that are included in the movie that aren't relavant to plot development and can be a little distracting.  However those distractions aren't enough to bring the rest of the movie down and on the whole the movie advances at a "old-time" pace - they take the time to set the story up before bringing in the non-stop action.

The cinematography is excellent, switching between the traditional action-movie-follow-the-car-chase shots, to the proper use of the first person shooter view during a few scenes.  They keep the panning just slow enough so you can follow what is going on, making for an exciting movie.

Shia LaBeouf seems to have finally fit into his role.  I could feel Sam's frustration for not being able to get a job after saving the planet twice - mostly because he was forbidden from discussing the details of it with people.  But when he drops his guard, it didn't seem quite right at the time.  Rosie Huntington-Whiteley did an acceptable job as Carly, Sam's love interest, considering the script.  I didn't quite feel the chemistry between Sam and Carly all of the time, and Carly comes out of left field for one scene that doesn't make any sense in relationship to her behaviour during the rest of the movie - perhaps a scene of hers was cut from the film that would explain it.  But her chemistry with Patrick Dempsey, who plays Dylan, her boss, was much better.  It was refreshing to see Patrick Dempsey play a slightly different role than the ones he normally plays, but he falls flat when you really look at it - I think he should continue to explore these kind of roles but he does need to improve on how he plays those kind of characters.

Now the Blu-Ray release falls into an interesting category.  Yes, the picture is crisp and sharp, but because they did film it in a larger format for the theatrical release, even the Blu-Ray on an HDTV is letterboxed, which was distracting and actually caused problems for my player and TV when it tried to autoadjust to eliminate them.  The sound however was amazing and does envelop you, especially during the action scenes.   But the Blu-Ray release was complete barebones – no special features at all, even though some of the price is redeemed by being a full combo pack.   Apparently the 3D version of this film will be released soon, as my copy did include a $10 off coupon on said "limited edition" release, which will hopefully contain special features.
Cast:
Directed By:
MPAA Rating: PG-13

For more information about Transformers: Dark of the Moon visit the FlickDirect Movie Database. For more reviews by Roger Longenbach please click here.

Transformers: Dark of the Moon images are © Paramount Pictures. All Rights Reserved.

Nathan M Rose
The phrase, "the third time is a charm" has never held more true than with this years' Paramount and Michael Bay's third Transformer outing: Transformers: Dark Side of The Moon.   Following the events of the first two films, we see Sam Witwicky as a college graduate having a h...
Full Review | Grade: A