The Expendables are back, and this time they are even more explosive than before! 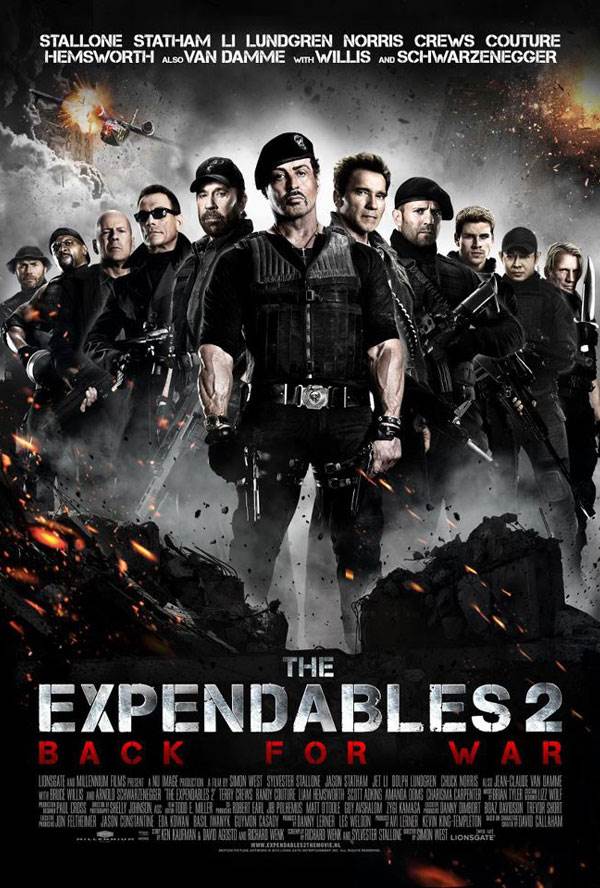 Purchase   DVD/Blu-ray/4K UHD
The Expendables are back, and this time they are even more explosive than before. All the old cohorts from the original movie return, joined by new recruits Billy the Kid (Liam Hemsworth), Booker (Chuck Norris), Jean Vilain (Jean-Claude Van Damme) and Maggie (Yu Nan), in director Simon West's sequel.

In 2010, the first Expendables read like a who's who of 80's and 90's action movie stars, and brought together the likes of Willis, Stallone, Statham, and Schwarzenegger. There were whispers that this was just an excuse for one last hurrah, to make an action movie like it used to be made, before CGI became as advanced as what it is today, and to shut the book on an era in which hard hitting macho men were the superheroes of the day. I, for one, am glad that book was not so easily closed.

The opening minutes have got to be the most explosive opening to any movie I have seen in a long while, if ever. With the team of mercenaries on what seems to be a snatch-and-grab mission, speeding trucks with guns a-blazing, downing a helicopter in a most imaginative way, all before the opening credits -- and this is just a taste.

The plot of the film is a simple one. An easy paycheck, one that sees Barney Ross (Stallone), Lee Christmas (Statham) and the gang team up once again with elusive CIA operative Mr Church (Willis): go into a foreign country, find a crashed plane, recover an item of world importance, and then head home. Things do not quite go to plan, especially when Jean Vilain shows up. There is no need to know any more than that, as by this time you will find yourself deeply rooted to you seat, wanting to see how it's all resolved.

Unlike the 80's and 90's, where the sequel was never any better than the original film, the second helping of the Expendables is much better than the first. With Simon West taking charge of the director's chair, the movie just didn't move; it flowed from one location to the next, seamlessly. The followup features better and bigger fight scenes than the first, and humour that delivered some great laughs and one-liners I'll remember for a while, as well as some cameos that would make any genre lover reach for the rewind button. Fans of Terminator, Die Hard and Rambo will enjoy the parody and references to those films, as there are many, and I am sure many more I missed.

On the strength of it, you could easily see a third instalment on the horizon for this franchise, and if there was ever to be a third installment, I would hope for Yu Nan to reprise her role of Maggie. Knowing what you were going to get from the rest of the cast, she was a bit of an enigma; seen as an outsider from the start, she was very much part of the gang by the end, overcoming many of their prejudices and gaining their respect.

Although it is not flawless, movies like this don't have to be. I went into it a fan of the first, and wanting this one to be as good, if not better, I was not disappointed at all! It is a fast paced adrenaline rush of a movie that certainly packs a punch, and one that should not be missed.

Purchase a DVD/Blu-ray/4K UHD physical copy of The Expendables 2 today at Amazon.com

Download The Expendables 2 in Digital HD/4K from the iTunes store.

For more information about The Expendables 2 visit the FlickDirect Movie Database. For more reviews by Paul Kates please click here.

The Expendables 2 images are © Lionsgate. All Rights Reserved.

Read More Reviews For The Expendables 2