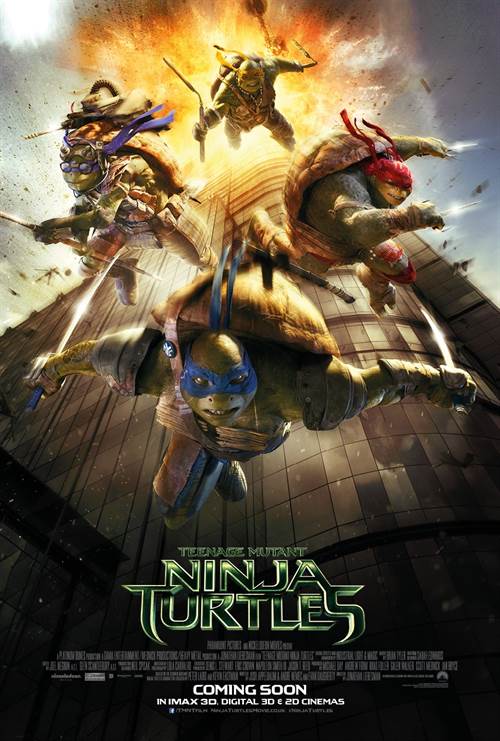 Foot Clan have an iron grip on everything from the police to the politicians. The future is grim until four unlikely outcast brothers rise from the sewers and discover their destiny as Teenage Mutant Ninja Turtles. The Turtles must work with fearless reporter April O'Neil (Megan Fox) and her wise-cracking cameraman Vern Fenwick (Will Arnett) to save the city and unravel Shredder's diabolical plan.


Watch Michelangelo, Raphael, Donatello and Leonardo drop a beat ...  8/6/2014 4:02 PM EST
The city needs heroes. Darkness has settled over New York City as Shredder and his evil Foot Clan have an iron grip on everything from the police to the politicians.  The future is grim until four unlikely outcast brothers rise from the sewers and discover their destiny as Teenage Mutant Ninja Turtles.  The Turtles must work with fearless reporter April O'Neil (Megan Fox) and her wise-cracking cam...  More>>

Teenage Mutant Ninja Turtles Film Shutdown  6/15/2012 3:55 PM EST
Teenage Mutant Ninja Turtle fans will be disappointed to hear that the upcoming film has been shut down. For now, at least.There are reportedly some issues with the script. Originally, the film was slated for a December 2013 release. But now, it's looking more like May 2014.  There are no comments confirming any reasons for the shutdown or if it will be indefinite or not....  More>>

Teenage Mutant Ninja Turtles - From Outer Space?  3/19/2012 11:49 AM EST
There is some wild speculation going on about a recent comment that director Michael bay made about the upcoming "Teenage Mutant Ninja Turtles" film.While at the 2012 Nickelodeon Upfront, Bay said, "When you see this movie, kids are going to believe that one day these turtles actually do exist…when we are done with this movie. These turtles are from an alien race, and they're going to be tough, ed...  More>> 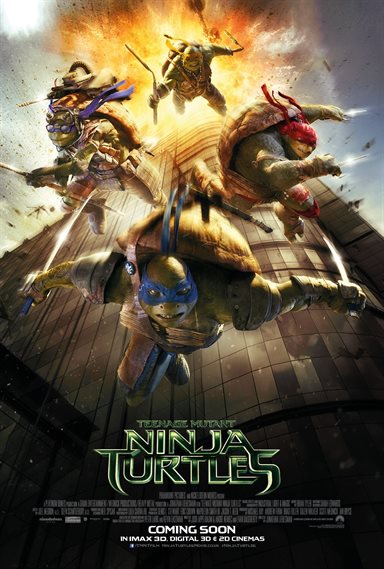 For years various studios and companies have been trying to find a way to get the Teenage Mutant Ninja turtle property back on the big screen, and this August it will be finally accomplished by Platinum Dunes, Nickelodeon, and Paramount.

The premise is simple – Four turtles and a rat come into contact with a mutagen agent that transforms then from lowly life forms into talking superhero's that are teenage (except the rat) ninjas that happen to be turtles. They along with reporter April ‘O Neil fight to save the world from Shredder and his Foot Clan.

The film produced by Transformer loving Michael Bay, and directed by Jonathan Liebesman (Wrath of the Titans) takes place in modern times, with New York City devastated by Foot Clan attacks on its society. Enter intrepid reporter April O'Neil (Megan Fox) who is trying to bust out of fluff piece reporting and get to the crime division. During her nightly freelance investigations she comes into contact with the Turtles and Splinter and comes to realize their paths have been connected for some time. Together they take on Shredder and the Foot Clan trying to save the city from a deadly toxin.

From the onset this rendition of the Turtles has been plagued with backlash from the loyal fans of the comic book, the original 80s cartoon, and previous film series. It started with a rumor that the Turtles were aliens. Then once the first trailer came out, the backlash continued on to the Turtles having nostrils, and their look deviating from origins.

While some fan outrage was to be expected, especially from the Gen X'ers, as with every other nostalgia property, this one seemed to have some creditable criticisms, and I am sad to report that they were very valid.

While the screenplay developed by Josh Appelbaum and André Nemec (Mission Impossible: Ghost Protocol) has its faults, it is actually pretty good with humor injected at the right place and the movement of the story along at a rapid pace. Where Teenage Age Mutant Ninja turtles fails is on their updated creation of some of the characters. Sometimes the phrase "less is better" applies, and it certainly does in this case. Shredder's outfit is a joke with way too much ornate metal on it, and some outrageous weapons that are not and should not be necessary for a ninja master. While the turtles height and CG are nothing to complain about, the nostrils that most fans were worried about are unfortunately spot on. They look so out of place it distracts you from the film. Continuing along on horrible CG is the Turtles sensei, Splinter. With today's CG, and seeing a very believable, talking raccoon last week in Guardians of The Galaxy, you would think he would at least look semi decent. Unfortunately he is the worst CG that the film has to offer. In fact today's TV shows have better effects.

For their part, the live action cast, played by William Finchtner (Armegeddon, Pearl Harbour) , Megan Fox (Transformers, Jenifer's Body), Will Arnett (Men in Black 3, Jonah Hex), and Whoopi Goldberg (Sister Act,  Ghost) handled their parts very well with what they had to work with.

All-in-all Teenage Mutant Ninja turtles is a very forgettable film, where, for the first time in a long time, the script and live actors did not cause its downfall. Maybe next time they should turn to Jim Henson studios as in the past to create the proper look and feel to this property. Until then I think I will go watch my iTunes copy of the 80s cartoon.