Avengers: Endgame doesn’t disappoint.  There is so much to absorb that one sitting isn’t enough. 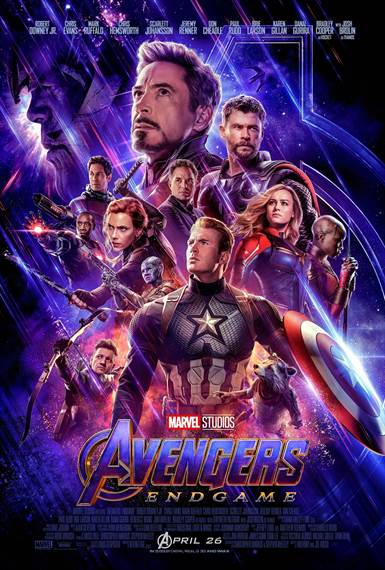 Purchase   DVD/Blu-ray/4K UHD
Yes, people die…just like in real life.  Yes, some superheroes come back to continue on the legacy of the Marvel Cinematic Universe and yes, some don't.  It's been eleven years and twenty-one movies in the making and now we get to watch as the Avengers battle Thanos for control of the galaxy.  It's easy to say that Avengers: Endgame is one of the most highly anticipated films of 2019 and I can tell you it lives up to the hype.  Fans of the franchise won't be disappointed and anyone who saw Avengers: Infinity War should be satisfied with the resolution of the saga.

When the film begins they are feeling the after effects of "the snap".  Tony Stark/Iron Man (Robert Downey, Jr.; Sherlock Holmes) and Nebula (Karen Gillan; Jumanji: Welcome To the Jungle) are floating helplessly in a spaceship.  Steve Rogers/Captain America (Chris Evans: Gifted), Black Widow/Natasha (Scarlet Johansson: Lost In Translation) and Thor (Chris Hemsworth; Snow White and the Huntsman) are at Avengers headquarters trying to figure out how to bring everyone back.  Suddenly, Captain Marvel/Carol Danvers (Brie Larson; Room) comes and saves the spaceship and meets the Avengers.

Then it is five years later and Earth (and the rest of the Galaxy) is trying to pick up the pieces when Scott Lang/Ant-Man (Paul Rudd; I Love You, Man) shows up after having been stuck in the Quantum Realm.  After finding his daughter and learning about what happened he heads to Avengers Headquarters to discuss his theory about time travel.  He, Steve and Natasha implore Tony to help them create a vortex so they can go back and collect the infinity stones before Thanos (Josh Brolin; Deadpool 2) can get them.  Great plan but, of course, nothing goes the way it should so people die and an epic battle ensues.  And that is all I'm going to tell you because I don't want to spoil the ending.

Acts one and two only include some of the main players - Thor, Ant-Man, Captain America, Black Widow, Iron Man, Rocket (Bradley Cooper; A Star Is Born), Bruce Banner/The Hulk (Mark Ruffalo; Spotlight) and Clint Barton/Hawkeye (Jeremy Renner; The Hurt Locker) - but some players they are.  Everyone brings their A game and moves the story along at a decent pace.  When the third act arrives we get glimpses of almost everyone and the last thirty minutes of the film is exciting and thrilling.

Of course, there are some upsetting scenes and many people will leave the theater crying.  As I said already… people die and not necessarily the people you want to have die.  But some people come back and you will find yourself cheering more than once before the movie is over.  There is also the last cameo of Stan Lee before he passed so there is a special moment for any Marvel fan to savor.

The Russo Brothers (Captain America: The Winter Soldier) do an excellent job with this three-hour film.  I often complain that superhero movies have action scenes which last way too long or that lack dramatic content in favor of action.  That is not the case here.  They blend the action with drama that moves the plot along and keeps the audience engaged.  The effects are sharp and clean and nothing looks fake or fabricated. The storyline takes a different look at time travel and spends a minute mocking previous time travel films which definitely adds some of the humor to the film.  The three-hour running time flies by and before you know it the movie is over.

There are always questions that don't get answered or at least not to one's satisfaction and the deaths are hard to take but Avengers: Endgame doesn't disappoint.  There is so much to absorb that one sitting isn't enough and I can't wait to get to the theater so I can see it a second time.

Download Avengers: Endgame in Digital HD/4K from the iTunes store.

Listen to the Avengers: Endgame soundtrack on Apple Music.

For more information about Avengers: Endgame visit the FlickDirect Movie Database. This release has been provided to FlickDirect for review purposes. For more reviews by Allison Rose please click here.