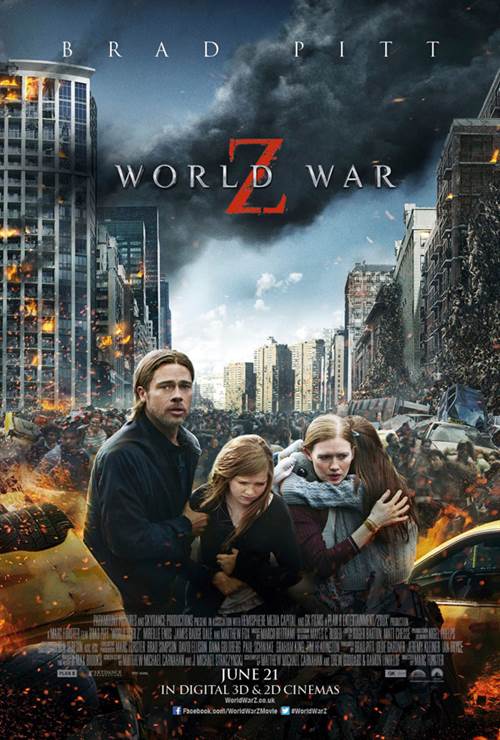 The suspense is killer in this fast-paced, pulse-pounding epic of the potential last days of the human race. Former United Nations employee Gerry Lane (Brad Pitt) is called upon to help stop the chaotic pandemic that has gripped populations around the world. Lane fights to keep his family safe, while searching for an answer to the outbreak before it destroys all of civilization.


World War Z Sequel a Strong Possibility  9/9/2013 10:53 AM EST
Paramount Pictures is said to be exploring the possibility of making a sequel to "World War Z", the thriller starring Brad Pitt.The film did gross $536 million worldwide, and had critical success, so it's not a surprise move being made. Brad Pitt commented on the subject, saying, "We're certainly talking about it, yes. We have so many ideas on the table from the time we spent developing this thing...  More>>

Goddard and Lindelof Talk About World War Z Scene Alterations  6/24/2013 1:48 PM EST
Everyone always wonders what winds up on the cutting room floor when editing a film, and now, thanks to scribes Drew Goddard and Damon Lindelof, we have some answers as to what was changed in "World War Z".   Apparently the whole ending of the film was reconfigured.  In the original ending, a large scale zombie battle takes place in Russia for nearly 45 minutes. The new ending mostly takes place i...  More>>

World War Z Premieres in London  6/3/2013 3:44 PM EST
"World War Z" premiered in London on Sunday, and Brad Pitt was accompanied by his partner, Angelina Jolie, in her first public appearance since her mastectomy.   The pair walked the black, not red, carpet, giving interviews along the way.  Pitt told one reporter that it is the "most intense thing you will see this summer." He added that he is very excited about the world finally seeing the film, w...  More>> 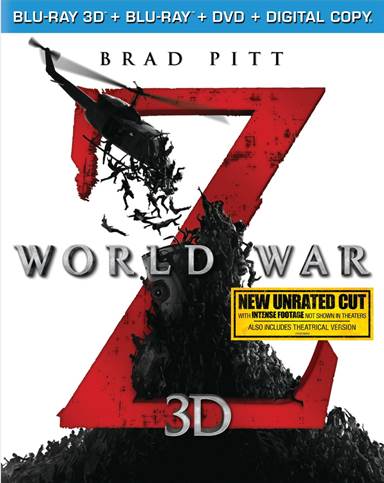 One of the best picks so far this year for the Action category World War Z has entered the home entertainment market and it comes in various formats including Blu-ray, Blu-ray 3D and DVD.  Packed with bonus features the Blu-ray has an unrated version that contains extra footage of the zombie onslaught.  The movie will also be released on Video on Demand, but if you are a collector of action films grab a Blu-ray combo pack that includes the DVD and a digital copy.

The opening sequence in the zombie thriller World War Z is very intense so brace yourself as the film gets wildly extreme.  These first15 minutes alone are compelling enough to provide an adrenaline rush, but that's only the beginning of a relentless roller coaster ride.

The story centers on Gerry Lane (Brad Pitt) who has recently retired from a United Nations investigation team to be with his family away from the danger of his past life.  After a morning of pancakes with his family Gerry, his wife Karin (Mireille Enos) and his two young girls Constance (Sterling Jerins) and Rachel (Abigail Hargrove) take off in their car for a vacation.  On their way out of the city they run into a massive traffic jam in the downtown area.  Wondering what is happening, Gerry gets out of his car to see explosions and commotion in the streets with packs of zombies biting and infecting people while on a rampage.

From this point on the nonstop action and violence doesn't let up with Gerry getting his family to safety then being enlisted for a mission to get a scientist to Korea where they may have an answer to the crisis of the now global pandemic.  Director Marc Forster (Quantum of Solace) does an excellent job of keeping his film tight, letting out the mystery of where the infection began, whether it can be controlled and what the future has in store for the world.  He uses Pitt as his piper who we follow into the unknown blindly at first then revelations bit by bit.

Brad Pitt does a terrific job as Gerry the strong willed agent who dives into danger to help save the world and his family from this ominous plague.  While the role could have gone to many, Pitt certainly shows his penchant for the part as he gets involved in one tight situation after another.  His ability to express oncoming danger, determination in dealing with it and empathy for loss of life around him keeps the movie compelling.

The computer graphics, sets, amazing make-up, incredible stunts and special effects make the show work.  Zombies look hideously realistic, the onslaught by them takes on a creepy atmosphere and the many close-ups of the undead are eerie with chattering teeth and bulging white eyes.  CGI of hundreds of people being attacked gives the film a panicky feel. It works especially well watching Gerry try to get his family to safety in the streets of Philadelphia with the evolving zombies turning their prey into the walking dead in a matter of seconds.

Speaking of the visuals, the video quality is extremely good on Blu-ray played on HD Television.  The 1080p High Definition 2.35:1 keeps the same Aspect Ratio as when it played in theaters.  Clear, clean and not a bit of distortion the film gives an excellent presentation on the home HD screen.  The outstanding computer graphics with the hordes of zombies climbing the Israeli walls are nicely captured on Blu-ray.

The sound comes through my television speakers very good, but I did ramp it up with a sound bar to get the full effect of a movie theater.  The surround speakers kick in a lot giving one the feel of being in the center of the action.  I was able to use the 7.1 DTS-HD Master Audio, but even with the Dolby 5.1 on the DVD it comes through loud and clear.

The bonuses are many with over an hour of extra features:

The Blu-ray has the unrated version with extra intense footage of the film and the DVD the standard theatrical version.

"Origins" takes a peak at how the film was brought to the screen.  Very interesting, this segment is especially good for budding script writers and filmmakers.

"Looking to Science" Kind of interesting, it looks at the science around the possibilities of zombies.

"WWZ: Production" This is the ‘making of' the special that usually accompanies most big releases.  Director Marc Forster takes the film apart in four special segments from the high adrenaline opening, to sets, CGI that includes the amazing zombie attack in Israel and Korea and how they filmed the airliner sequence.  This is one of the better added features I have seen on a Blu-ray release.

In addition to the Blu-ray and DVD copies of World War Z the combo pack has a choice of a Digital Copy of the film or Ultra Violet that allows you to download the film to your computer or carry around player.

World War Z has been rated PG-13 by the MPAA for intense frightening zombie sequences, violence and disturbing images. Be cautious when deciding to allow immature children see the film as it does have some scenes that may be inappropriate for adolescents.