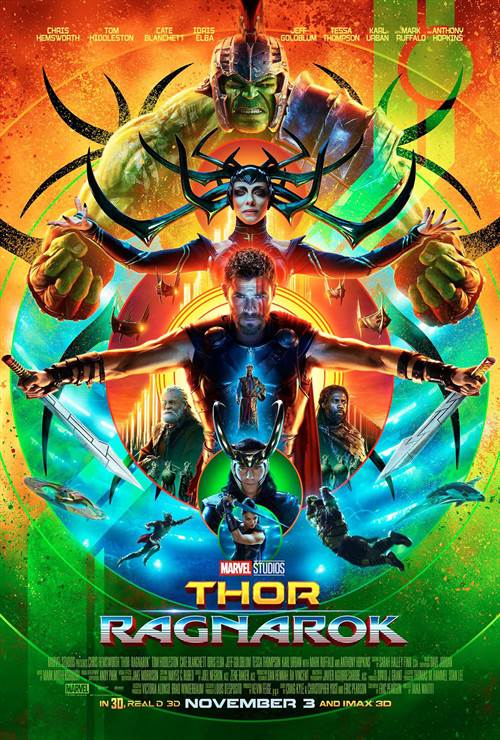 In Marvel Studios’ “Thor: Ragnarok,” Thor is imprisoned on the other side of the universe without his mighty hammer and finds himself in a race against time to get back to Asgard to stop Ragnarok—the destruction of his homeworld and the end of Asgardian civilization—at the hands of an all-powerful new threat, the ruthless Hela. But first he must survive a deadly gladiatorial contest that pits him against his former ally and fellow Avenger—the Incredible Hulk! “Thor: Ragnarok” is directed by Taika Waititi and returns Chris Hemsworth starring as Thor and Tom Hiddleston reprising his role as Loki. They are joined by Cate Blanchett, Idris Elba, Jeff Goldblum, Tessa Thompson and Karl Urban, with Mark Ruffalo and Anthony Hopkins.

Download Thor: Ragnarok in Digital HD/4K from the iTunes store.

Listen to the Thor: Ragnarok soundtrack on Apple Music.


Win A Complimentary Pass To A 3D Advance Screening of Marvel Stu...  10/23/2017 11:22 AM EST
Six years ago audiences were introduced to a new superhero in the Marvel Universe when Chris Hemsworth (Snow White and the Huntsman) burst onto the screen as Thor. Next month he reprises the role in THOR: RAGNAROK and Marvel Studios along with Flick Direct want to give a few lucky individuals the chance to see it early.  South Floridians can win complimentary passes to a Special 3D Advance Screeni...  More>>

Planet Hulk to be Featured in Thor: Ragnarok  12/22/2016 10:52 AM EST
Some exciting news for all you Hulk fans out there - the Plant Hulk storyline will be incorporated into the upcoming Thor: Ragnarok film. We knew that mark Mark Ruffalo would be returning to the Thor franchise, but now it has been confirmed that we will be visiting Sakaar (Planet Hulk) in the film.Director Taika Waititi said, "Sakaar was just an insane, far-off, futuristic place which was the bigg...  More>> 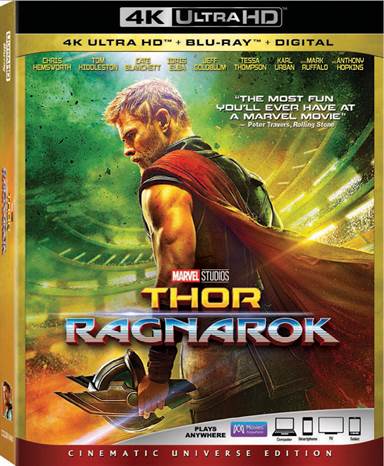 For the last ten years, Marvel Studios has brought some of our favorite superheroes to life. From Ironman to Spider-Man and The Incredible Hulk to Captain America, they have peaked our imagination.   They even gave us more comical characters like Ant-Man, Guardians of the Galaxy and Deadpool.  In 2011, Marvel introduced audiences to the Asgardian God of Thunder, Thor, brought beautifully to life by Chris Hemsworth (Snow White and the Huntsman). With his magical hammer (Mjolnir) he wields immense power to take down his evil enemies. In the third installment in the film series - coming to 4K, Blu-ray, DVD and digital download this month – we see a different side to Thor than we have in the past.

As Thor: Ragnarok opens, we see our protagonist in unfamiliar surroundings caught up in a net. It turns out he is in the land of lost things (Sakkar) as a prisoner of the Grandmaster (Jeff Goldblum; Jurassic Park) and forced to fight a great warrior… to the death.  Said Warrior is none other than Hulk (Mark Ruffalo; Spotlight).  Anyway, Thor ended up in this no man's land after discovering he has an older sister, Hela (Cate Blanchett; The Lord of the Rings Trilogy) who was imprisoned and forgotten but released upon their father, Odin's (Anthony Hopkins; The Silence of the Lambs), death.

Hela's only goal is to destroy Asgard and eight other realms and wreak havoc on this world so she can control it and rule over it all.  She is the Goddess of death and we learn that previously Odin wasn't so kind and gentle and Hela was his "right-hand man".  As Thor realizes the only way to save Asgard is to have it destroyed, he devises a plan with the help of Loki (Tom Hiddleston; Kong: Skull Island) and a great Valkyrie warrior (Tessa Thompson; Creed).  Of course, Thor and his team save the day (well sort of) opening the door to a new adventure down the road.

Chris Hemsworth took on the main role of Thor seven years ago and he has truly made it his own.  We have watched Thor evolve throughout the films and Ragnarok takes us in a whole new direction.  As the script is less serious this time around, we get to see Hemsworth expand this character with more humor and laughs than before.  Hiddleston has always been a terrific actor and sidekick to Hemsworth and this film is no exception.  We also get to see Thor build a relationship with Hulk and in these scenes, as Hemsworth and Ruffalo play off each other beautifully.  The ladies of this movie, Blanchett and Thompson, are masterful as strong female characters and both are a little bit badass.  Honorable mention certainly has to go to Hopkins and Goldblum.  These veteran actors bring quite a bit of weight to their roles (Hopkins as an aged and dying God; Goldblum as the fun-loving ruler of an awkward planet).

The 4K Blu-ray is 2160p High definition video with HDR10 codec and is amazing to watch.  The colors are magnificent, especially in the lost world.  They pop off the screen and draw the viewer in.  The Dolby Atmos audio is an excellent complement to the video.  The special effects boom large and loud and surround the viewer.  The Combo pack has the 4K Blu-ray, regular Blu-ray, and a Digital HD download.  The extras are plentiful and include an intro from Director Taiki Waititi (Hunt for the Wilderpeople), extras and featured extras.  The latter two are broken down into segments including  Audio Commentary, Director Intro, Finding Korg, Sakaar: On the Edge of the Known and Unknown, Getting in Touch with Your Inner Thor,  Unstoppable Women: Hela & Valkyrie, Journey into Mystery, Team Darryl, Marvel Studios: The First Ten Years - The Evolution of Heroes, 8-Bit Sequences, Deleted Scenes and a Gag Reel.  Like the movie itself, the extras are funny in a goofy sort of way.

The latest Thor movie does its best to reinvent itself from the serious superhero, "save the world" usual fare into more of a humorous, Guardians of the Galaxy kind of way but, sadly, it just doesn't mesh well with what we know of the series.  This juxtaposition is somewhat jarring and, for me at least, it doesn't work all that well.  There are a few laugh out loud moments but I hope they return to a more serious Thor for the next go around.