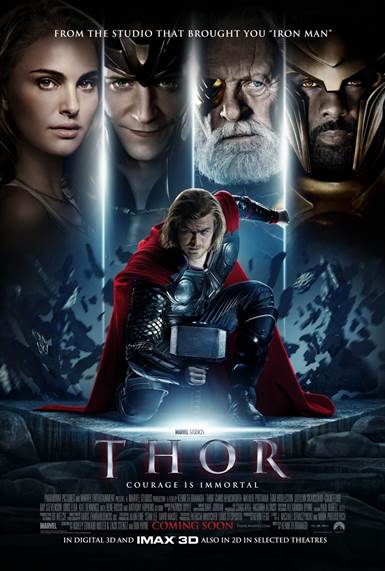 Purchase   DVD/Blu-ray/4K UHD
First there was Iron Man, then the Hulk; soon there will be Captain America but first comes the mighty Thor. That is the latest in the wave of comic book movies to hit theaters in recent years. Since the success of the first Iron Man film Marvel has been able to begin establishing continuity to their movies and characters. This began with Iron Man and with each successive film the back story of this universe slowly builds.

But first let's discuss Thor; the film stars Chris Hemsworth as the God of Thunder, son to the all-powerful Odin and brother of Loki. The opening sequence shows Thor's arrival on Earth, or Midgard as it is known by Thor and his people. Here we are also introduced to Jane Foster (Natalie Portman) a physicist trying to deduce the origin of strange meteorological phenomena that has been occurring recently. It culminates with Thor's arrival.

Before we can go further though, we jump back some time to when Thor was a young boy and his father was reciting the tale of the war against the Frost Giants to Thor and Loki. Odin banished his enemies back to their own realm and ushered in an era of peace. Now Thor is a young man and about to take his rightful place upon the throne of Asgard, their home. Before that can happens a rouge group of Frost Giants infiltrates Asgard and attempts to steal a weapon that will allow them to restart their war.

They are unsuccessful but Thor being aggressive and stubborn believes they should go the Frost Giants home to take revenge for they transgression. Odin forbids him to go but Thor goes anyway, along some loyal friends. When their attempt to wipe out their enemies fails, Odin steps in and punishes Thor for his disobedience, banishing him to Earth and stripping him of his powers and weapon. This brings back to his arrival on Earth and Jane Foster's discovery of him.

After some initial comedic misunderstanding Jane and her colleges Erik (Stellan Skarsgard) and Darcy (Kat Dennings) take Thor back to their lab where they try to figure out how he is connected to the disturbance from the night before. At the same time, Thor's hammer has landed on Earth and some locals who have discovered it are attempting to lift it. Unbeknownst to them Odin has placed an enchantment on it that only allows it to be lifted by one who is worthy.

When Thor learns of the hammer's existence on Earth he heads out to retrieve it. What he does not expect is that S.H.I.E.L.D., a government peace keeping task force has already secured the site where the hammer has landed and are not about to allow him to just walk in and take it. After Thor battles his way past the guards he is astonished to find out that he cannot lift the hammer, naturally because he is still unworthy of its power.

At the same time that Thor is learning about his new home, Loki is setting about to take over Asgard as its new King since Odin has become too weak to lead. He makes a journey to Earth to be sure that Thor will never attempt to return to Asgard by telling him that Odin has died and condemned his son to his final breath. After being unable to lift the hammer and hearing this news Thor begins to accept his new life on this world. Of course that won't be the case; Loki makes a deal with the Frost Giants and sends a doomsday golem to finish off Thor. As the events culminate in a final showdown between Thor and his brother he must find a way to return home in time to save his father and his people from the onslaught of the Frost Giants.

With most super hero films you go in expecting heavy action with some light drama thrown in for good measure, and that is no different with this film. Hemsworth certainly looks the part and does a good job when it comes to the action sequences. Each character has enough screen time for you to get a sense of who they are. The only times that the audience may feel a little lost is when learning about the mythology of Asgard. Without a little background in Norse mythology there may be times where you feel overwhelmed by what's being said. Thankfully the film is aware of this fact and doesn't tread too long in history. For comic book fans this movie will be a welcome delight as we see more of a presence from S.H.I.E.L.D. and their field leader Agent Colson.

Anyone who has been paying attention will squeal with delight at the prospect of what's to come from this film. Overall Thor is a fun action film with excellent special effects, great looking actors and lots of comic lore that is sure to make any movie goer happy they went to the theater.

Download Thor in Digital HD/4K from the iTunes store.