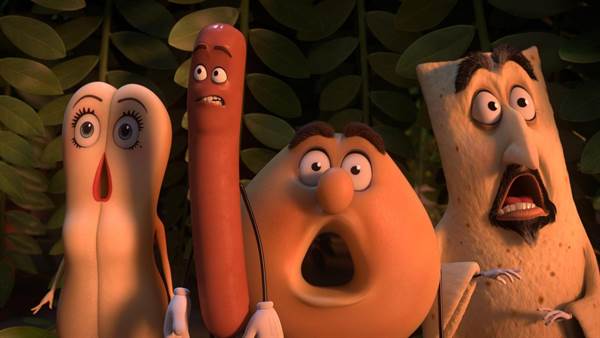 Sausage Party, the first R-rated CG animated movie, is about one sausage leading a group of supermarket products on a quest to discover the truth about their existence and what really happens when they become chosen to leave the grocery store. The film features the vocal talents of a who’s who of today’s comedy stars – Seth Rogen, Kristen Wiig, Jonah Hill, Bill Hader, Michael Cera, James Franco, Danny McBride, Craig Robinson, Paul Rudd, Nick Kroll, David Krumholtz, Edward Norton, and Salma Hayek.

Download Sausage Party in Digital HD/4K from the iTunes store. 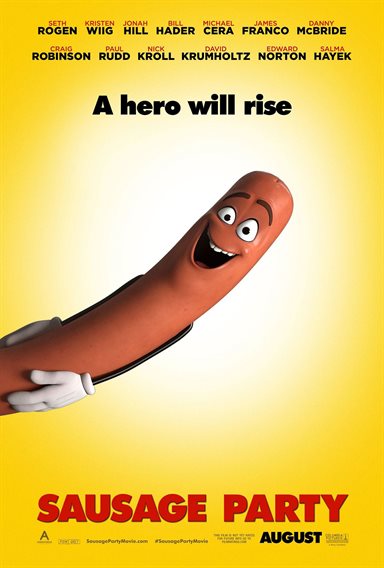 Take some animated supermarket food, throw in some catchy tunes, and stir with a bunch of celebrity voices… what could be bad, right?  Oh my lord!  You are not prepared for what this delicious recipe concocts.  Bawdy, immature, outrageous, over the top, raunchy humor and antics ensue and are sure to offend almost everyone in some way or another.  Welcome to the world of Sausage Party.

From what I am sure are the marijuana-addled brains of Seth Rogan (Super Bad), Jonah Hill (21 Jump Street) and Evan Goldberg (Super Bad) comes a love story with a moral.  Sausage Party will make you laugh, cry and oooh and aaah as you watch it.  At some point, it's bound to insult just about everyone in order to get to its deeper meaning.  Oddly, it's a little hard to get to that meaning since you can't really believe some of what is happening right before your very eyes.

All of the food at the supermarket is lead to believe that nirvana awaits them in the great beyond, just outside the grocery doors.  Each morning they sing a little ditty to greet the day hoping this is they day they will get "chosen" to go home in a "gods" bag.  However, when honey mustard (Danny McBride; Rock the Kasbah) is taken, and later returned, he plunges to his death before revealing the truth about what's on the other side.

In a quest for answers, Frank (Rogen) seeks out the wise Firewater (Bill Hader; Trainwreck) only to discover the horrible truth about what really goes on in the outside world. Meanwhile, franks buddies are all slaughtered when they get to the god's house except little, deformed Barry (Michael Cera; Superbad), who escapes and makes his way back to the supermarket to warn the others.

Oh, and did I mention there is a love story?  Yes, Frank and Brenda (Kristen Wiig; Bridesmaids) are a sausage and bun made for each other, but struggling not to give into temptation.  However, when Frank tries to discover the truth about the great beyond, Brenda is not on his side and friction occurs.  Ultimately, Brenda finds out Frank is right, he saves her life and then the real "friction" begins.

The cast is full of well known actors who do a terrific job; many of them voicing more than one character.  Some of the celebrities are expected like Rogen, Wiig and Hill but others, like Salma Hayek (Frida) as Teresa the taco, were an unexpected delight.  As controversial as this film is probably going to be, I am surprised so many well-known actors signed on.

Of course, you had to have your moral compass checked, so there is the underlying message of equality and "make love (literally) not war".  It also needed to bring everyone together to fight a common enemy and this movie found it.

The animation is great, which helps you to digest the story line.   The character development (it seems funny saying those words about a film like this) is well thought out and appropriate.  Technically, the film is well done.

Sausage Party isn't for everyone, but it's sure to be a cult classic and will probably do very well in the digital download/Blu-ray market several months from now.  I can honestly say there is nothing like it around and audiences should go see it for it's sheer originality alone.  Just be warned, you might be offended.