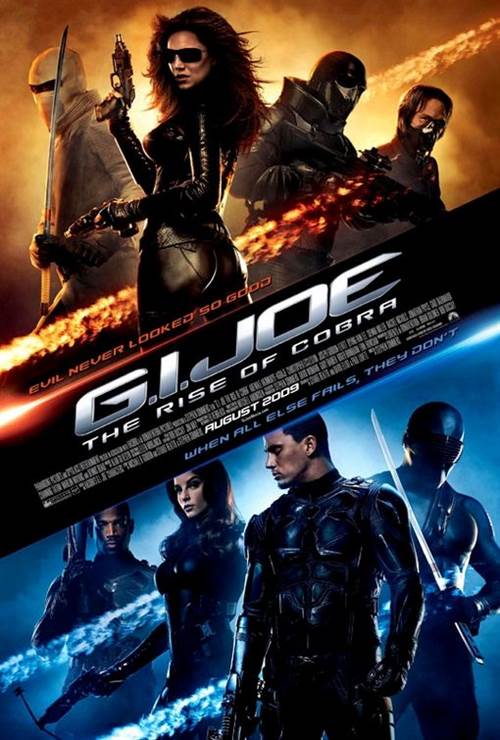 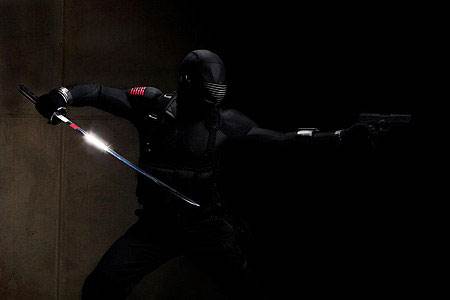 Paramount Pictures and Hasbro, whose previous collaboration was the worldwide blockbuster "Transformers," join forces with Spyglass Entertainment for another extraordinary action-adventure "G.I. Joe: The Rise of Cobra." From the Egyptian desert to deep below the polar ice caps, the elite G.I. JOE team uses the latest in next-generation spy and military equipment to fight the corrupt arms dealer Destro and the growing threat of the mysterious Cobra organization to prevent them from plunging the world into chaos. "G.I. Joe: The Rise of Cobra." is directed by Stephen Sommers ("The Mummy," "The Mummy Returns").

Download G.I. Joe: The Rise of Cobra in Digital HD/4K from the iTunes store.

Listen to the G.I. Joe: The Rise of Cobra soundtrack on Apple Music.

G.I. Joe: The Rise of Cobra images are © Paramount Pictures. All Rights Reserved.


Bruce Willis to Join "G.I. Joe"  8/11/2011 3:39 PM EST
According to Heat Vision, Bruce Willis could be on the cast roster for the "G.I. Joe 2: Retaliation".He is currently in talks to play the part of General Joseph Colton. He is the man who created and commands the special forces unit that carries his namesake, G.I. Joe.The film will be directed by Jon M. Chu and produced by Lorenzo di Bonaventura. It will star Channing Tatum, Dwayne Johnson, Adriann...  More>>

Ray Stevenson Cast In "G.I. Joe"  7/11/2011 1:27 PM EST
Heat Vision has reported that Ray Stevenson has been cast as a villain in the upcoming "G.I. Joe" film.The Rome," "Punisher: War Zone" and "Thor" actor will be playing Firefly, a member of the Cobra Organization. He is an expert with explosives as well as being a ninja and saboteur.Joining Stevenson will be Channing Tatum, Dwayne Johnson, Adrianne Palicki, Elodie Yung, RZA and D.J. Cotrona. The fi...  More>>

G.I. Joe Casting News  6/13/2011 2:31 PM EST
The G.I. Joe sequel is moving along, and some casting news has been released. Elodie Yung is now being considered for the role of Jinx, a ninja, for the upcoming film.Jinx, who is recruited by Snake Eyes to join the team, is a red-suited ninja who is a kung fu and sword expert.Other stars will include Channing Tatum and possibly Dwayne Johnson, who will play Roadblock....  More>>

Stephen Sommers to Direct "G.I. Joe" Sequel  8/4/2010 4:10 PM EST
According to TheWrap, Stephen Sommers, who directed "G.I. Joe", has signed on to direct the franchise's sequel. Rumors that Sommers' return to the project could have been hampered by alleged conflict on the set of the original film seem, now appear to be false. The original film grossed more than $300 million. Sommers also directed the box office hits "The Mummy" and Van Helsing". Capt. Duke Hau...  More>> 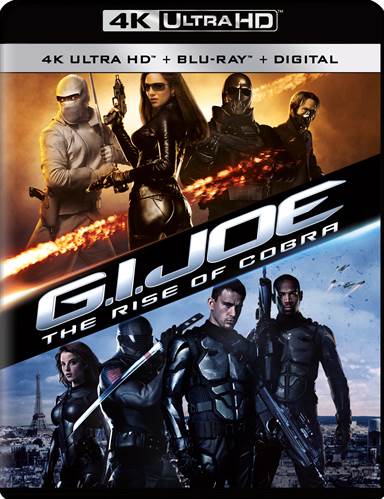 The year was 1923.  The place was Providence, Rhode Island.  The event was the creation of Hassenfeld Brothers, a textile company created by three brothers, Henry, Hillel, and Herman.  In 1942 the company had transitioned to making toys and in 1964 they created an "action figure" called G.I. Joe.  Originally, G.I. Joe was hugely profitable for the company but by the mid-1970s production of the toy was halted.  Over the years, the G.I. Joe series has had a growing presence in the media, first with comics, then books and records, and finally films.  The first live-action movie, released in 2009, was G.I. Joe: The Rise of Cobra.  Twelve years later, the film is available on 4K for the first time.

M.A.R.S., a weapons manufacturer, has created a new weapon using metal-eating Nanobots.  They sell four of their Nanobot-infused warheads to NATO, which is being transported by NATO military forces lead by Americans Conrad "Duke" Hauser (Channing Tatum; Magic Mike) and Wallace "Ripcord" Weems (Marlon Wayans; Scary Movie).  When the convoy is ambushed, Duke recognizes The Baroness (Sienna Miller; American Sniper) as his ex-fiancé, Ana.  Distracting Duke, Ana steals the warheads only to have them recovered by an elite special forces group of soldiers called G.I. Joes.

The Joes, as they are known, take the warheads to "the pit", their base of operations located in Egypt.  The head of the Joes, General Hawk (Dennis Quaid; The Parent Trap) then dismisses Duke and Ripcord but Duke argues as to why they should stay with the team.  Hawk reluctantly agrees to let them stay but requires them to train under members of the Shield team.  While training, the Baroness and Storm Shadow (Lee Byung-Hun; I Saw the Devil) break in and steal the warheads.  The Joes then must figure out what their evil plan is and stop them before they topple the largest cities in Europe.

It is obvious from the get-go that this is an action film first and dialogue wasn't a priority.  Tatum fits the bill as a soldier well, physically and mentally, but his acting skills are rough. Wayans neither adds nor detracts any significant contribution to the movie.  Miller is simply annoying though she manages her fight sequences well and Quaid is well…Quaid.  He generally tends to carry an air of authority so portraying a top-ranking military officer suits him.

Paramount typically does a good job with their 4K transfers, and this title is no exception.  Unfortunately, this means some of the special effects don't translate well and look fake.  Conversely, colors pop and details are sharp making the overall viewing experience enjoyable.

The audio is the same DTS-HD Master Audio 5.1 that was on the 2009 Blu-ray release.  It is disappointing that the audio wasn't upgraded to Dolby Atmos but the 5.1 sound is excellent with full surround sound effects.  Dialogue is crisp and the layered tracks are clean with no artifacting.

The Combo pack comes with the 4K disc, Blu-ray disc, and a Digital HD code.  There is also an audio commentary by Director Stephen Sommers (The Mummy) and Producer Bob Ducsay (Van Helsing).

If you grew up playing with G.I. Joe and knowing all the characters involved, this film is a decent interpretation of the comics.  However, if you are not familiar with the G.I. Joe background, and are not a fan of action, fighting, and guns, then this movie isn't for you.

It may look good and sound great, but the acting, script, and special effects leave a lot to be desired for the average person who isn't a diehard fan of the franchise.