Star Wars: The Rise Of Skywalker will both leave you satisfied yet longing for more. 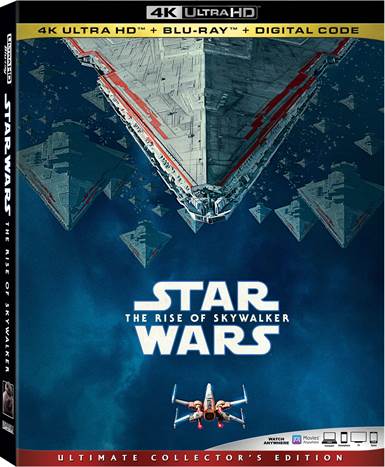 Hardly an introduction is needed. When you are suddenly surrounded by the first triumphant notes of its iconic theme song followed by its inwardly scrolling vertical marquee you already know where you are being transported. To a different universe filled with exotic alien creatures, heroic stories of the past written in an epic war between good and evil.  The Skywalker Saga, the center of the Star Wars story, began long ago in a galaxy far, far away and ends with "The Rise Of Skywalker".  It's fast-paced. It's fun. It's on as grand a stage and scale in anticipation and execution that a film can achieve. But is it any good?

The story picks up a few years after the end of ‘The Last Jedi'. Luke Skywalker has become one with the Force, the resistance is fledgling against The First Order headed now by Supreme leader Kylo Ren. Rey, still searching for her place in all of this as a Jedi, trains with Princess Leia. Out of seemingly nowhere (and with little explanation), the dead Emperor Palpatine has returned. Kylo Ren seeks out the emperor in an effort to usurp his power and influence while simultaneously tempting Rey to join him on the dark side of the force.

Rey, in her quest to understand who she is and what she is meant for, goes on a similar mission to bring down the emperor joined by the "good guys" Poe, Finn, and droids BB-8 and C-3P0. As their paths crisscross across the stars, Rey and Ren share in each other's struggles against the good and evil pulling within both of them, leading to an ultimate showdown with the emperor to decide the fate of the universe.

The bulk of the movie mostly involves a "fetch quest" with the heroes searching for "Sith Holocrons". This, in turn, leads the way to the planet "Exogol" where Palpatine has been hiding along with Sith loyalists who have built him a grand Star Destroyer armada and Army dubbed "The Final Order". Throughout the film we get some great cameos from classic characters (Lando Calrissian, Wedge) and some emotional moments of loss, finding oneself, and ultimate redemption.

As a stand-alone-film, The Rise Of Skywalker is very good. Everything you would want from a big-budget blockbuster is here. Nary a second goes by your eyes and ears aren't delighted to some new planet's scenery coupled with a lightsaber duel or frantic chase through a star destroyer. It is Star Wars through and through. Everything it was meant to be - a fun space adventure kids and adults can enjoy - is here and it's as satisfying.

Put through the larger lens of the entire Star Wars 9 film (!) arc, however, it falls flat. There is no explanation of how Palpatine has returned after seemingly being killed by Darth Vader to complete his character arc in Return of the Jedi. We get a prequel era quote from the emperor "The Dark Side Of The Force Is A Pathway to many abilities some consider to be unnatural" Oh Ok… Snoke, the main villain of the last two films is reduced to a puppet who is seemingly a clone of ...well that isn't explained either. Rey learns of her lineage but it feels forced as opposed to a "wow" moment like learning (spoiler alert!). Vader is Luke's father in The Empire Strikes Back.

What could have been an epic final battle between good and evil is reduced to a couple of voice-overs and a final undoing that is less than climatic. The weight and gravity of the entire saga just isn't there - and with this being "the end"...that's a real shame.

With the 4K technology at its finest, you would expect nothing less than an incredible video quality and you would be right.  Every Detail is clean and the black tones are deep and rich.  The Dolby Atmos audio certainly does this franchise justice with epic lightsaber battles attaching you from every surround speaker and explosions literally "rocking your world".  The dialogue is crisp and John William's score is once again at home in the background of the film.

There are hours of extras (most of which are on the Blu-ray disc) with a few being reserved for Digital HD only.  They include:

A good film that could have been great, The Rise Of Skywalker will both leave you satisfied yet longing for more. Perhaps, with books, action figures, theme parks, and more to keep you occupied within the Star Wars Universe that was the point. Until the next reboot….

"No one is ever really gone" - Luke Skywalker

Purchase a DVD/Blu-ray/4K UHD physical copy of Star Wars: The Rise of Skywalker today at Amazon.com

Download Star Wars: The Rise of Skywalker in Digital HD/4K from the iTunes store.

Listen to the Star Wars: The Rise of Skywalker soundtrack on Apple Music.

For more information about Star Wars: The Rise of Skywalker visit the FlickDirect Movie Database. This release has been provided to FlickDirect for review purposes. For more reviews by Eric English please click here.

Read More Reviews For Star Wars: The Rise of Skywalker