Star Wars: The Rise of Skywalker offers some interesting twists and the plot really focuses on the struggles of Rey and Ben. 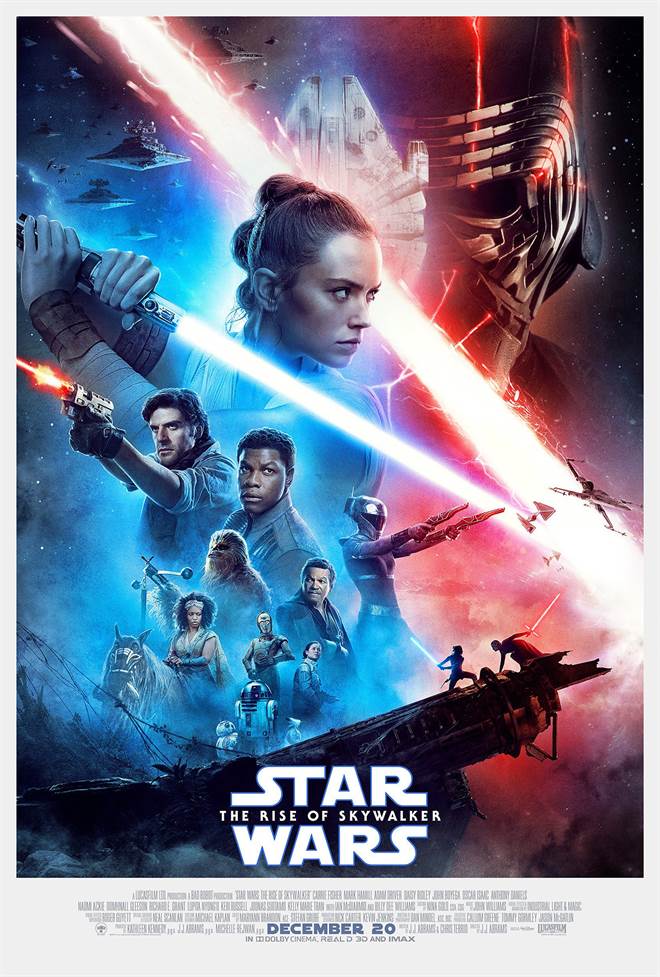 A long time ago, in a galaxy far, far away…42 years to be exact, a film hit theaters and forever changed the way we view science fiction movies.  Star Wars: A New Hope told the classic story of rebels warring against a powerful regime but offers the story with an intergalactic twist.  It made instant stars of Carrie Fischer (The Blues Brothers), Mark Hamill (Kingsman: The Secret Service) and Harrison Ford (Raiders of the Lost Ark) and created a franchise that has grown to epic proportions and shows no sign of stopping anytime soon.  The highly anticipated final chapter in the multi-decade saga, Star Wars: The Rise of Skywalker,  opens in theaters nationwide on December 20, 2019.

The first three films introduced us to the struggle between the Rebel Alliance and the Empire and began our fascination with the main characters – Luke Skywalker (Hamill), Princess Leia (Fischer), Hans Solo (Ford) and Darth Vader (voiced by James Earl Jones; Field of Dreams).  After the initial trilogy, there was a 16-year hiatus until the prequels came around in the late 1990s, the last of which was released in 2005.   It took another decade before the seventh, eighth and ninth films would once again create a frenzy at the box office and officially end the legend of the Jedi and the Skywalker lineage.

While there have been spinoff movies  - A Star Wars Story: Solo and A Star Wars Story: Rogue One -  neither matches the intensity or the anticipation of the nine movies in the series.  Those of us who are 45 years old and above, can remember have seen the first three movies on the big screen and the impact it made on the nation.  In the latest two films, The Force Awakens and The Last Jedi, we were introduced to the next generation of Jedi and evil villains in the form of a young scavenger named Rey (Daisy Ridley;  Murder on the Orient Express) and her counterpart,  Lord Kylo Ren (Adam Driver; Marriage Story).  While Rey tries to save Kylo/Ben from his darker nature, Kylo wants to push Rey over to the "Dark Side".

Ridley and Driver are well suited for their respective roles.  He portrays a man who is deeply conflicted with his chosen path and she offers some tenderness and vulnerability while producing an inner strength she didn't know she possessed.   The supporting cast members, including Oscar Isaac (Ex Machina), John Boyega (Pacific Rim: Uprising) and a host of other actors, help these two main stars shine.

The story offers some interesting twists and the plot really focuses on the struggles of Rey and Ben.   While the ending should leave audiences satisfied, there is a bittersweet feeling to it all.  The visuals we well done for the most part but some of the scenes look fake which can be distracting and humorous all at the same time.  There is some humor mixed in that will either make you laugh or disgust you if you happen to be a Star Wars purist.

The are several surprises that will thrill fans and the movie beautifully pays homage to all that has come before them.  Unfortunately,  This last one didn't really have the "feel" of a Star Wars movie and the two hours and twenty minutes running time is unnecessarily long.  One of the biggest surprises (that I'm sure was Abrams' idea) will have people audibly gasp while another scene will have some smiling.

While this isn't the best of the Star Wars franchise, it certainly fairs better than Episode 1, 2 and 3.  People will be flocking to the theaters this weekend for the finale and the movie will certainly gross higher in ticket sales that anyone could truly imagine.

It's exciting to watch film #9 but also bittersweet as we say goodbye to beloved characters we call "friend".

Eric English
Star Wars: The Rise Of Skywalker will both leave you satisfied yet longing for more.
Full Review | Grade: A