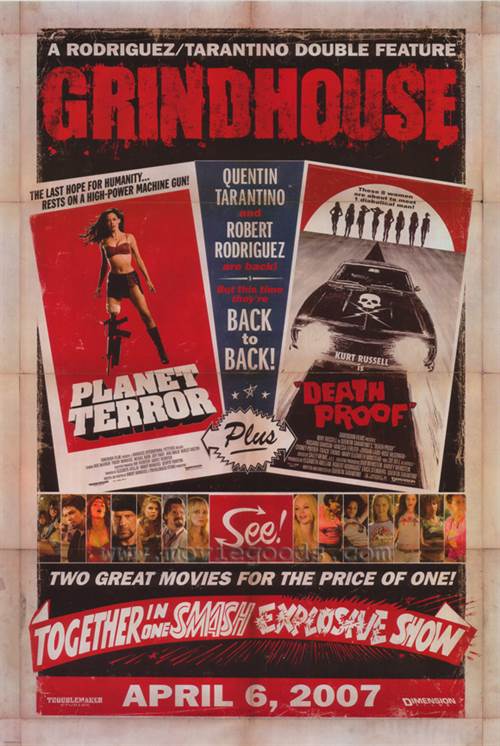 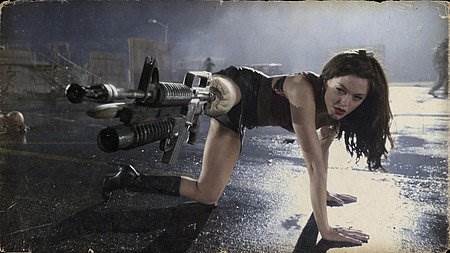 The film Grindhouse gleefully resurrects the theatrical experience of watching back-to-back "exploitation" movies. Written and directed by two of the genre's most hard-core and best-known fans, the film consists of two short features - one from Quentin Tarantino and the other by Robert Rodriguez - as well as a series of lurid trailers for non-existent movies.

Download Grindhouse in Digital HD/4K from the iTunes store. 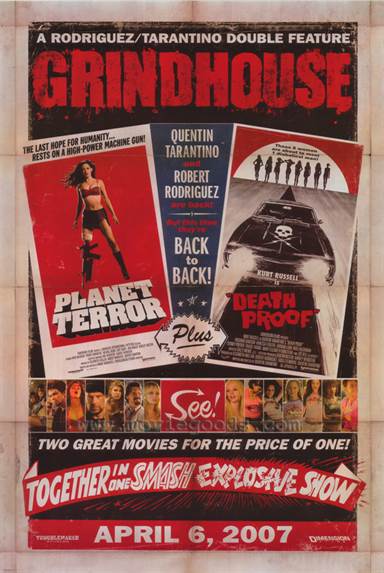 Think one of the more interesting things about Grindhouse is that Quentin knows that the trailers for it have to tell the audience what the hell it means. This is because if you weren't a somewhat older urban teenager in the late 60's and 70's you, hell, might not know.

So there you go: Blaxploitation, sexploitation, splatter movies, knock-off zombie films ... over the top violence, sex, and gore? Racial stereotypes? All of that is par for the course at the grindhouse.

Grindhouse, likewise, is the movie Clarence Worley would've taken the girl at the beginning of True Romance to if he couldn't get three showings of the Street Fighter movies. Red Apple cigarettes are smoked in Pulp Fiction because that's what people smoke in the Quentin-verse. In Grindhouse the camera gives them a second of focus because it's product placement.

Likewise, and as with the two Bills, the opening credits are from a 70's-era cinescope head-trip movie screen. And since we're at the theater, we get to see previews for Nazi-Werewolf movies, a Mexican blood-and-guts revenge story called Machete, and a show where Nick Cage plays Fu Manchu.

There's also, between features, an add for a Mexican restaurant (next to the theater) which must be a chain because a character in the movie has obviously bought a drink there.

In the Quentin-verse, Jimmie Dimmick lives with a nurse named Bonnie and, I think, gets bit parts in B-grade movies. He, really, isn't a very good actor (although he hangs with his very dangerous gangster friends and sometimes has to, you know, hide bodies at his house). Jimmie shows up in both Grindhouse features. In Planet Terror (Rodriguez) he is a demented toxic solider. In Death Proof he plays a more likable bar tender.

But what about the the features?

Well both of them were missing reels in the theater I saw it at (a cheap one, yeah--but I'd expect them to have at least most of the movie). Important plot points were lost! Maybe that's how they got the two full-length feature films down to a measly 3 hrs 11 minutes? Could be. Note: it was funny once. It was acceptable twice.

Also, note: the films themselves are pretty beat up. Scratches, lines, and other abuse shows through. They're not old ... maybe the theater isn't taking care of them properly?

But whatever. How were the features?

Planet Terror is gross, action packed, and way over the top. Toxic zombies, renegade army guys, and a man with a Mysterious Past find themselves on a collision course for hyperbole. Rodriguez, responsible for the worst excesses of From Dusk Til' Dawn doesn't disappoint here either with decapitations, lost limbs, and splattering mutations.

It was ... okay. I mean, pretty good for what it is--but what it is is a lot of gross violence with very little to hang it on. That's the Grindhouse ethic. It could stand to be shorter, in my opinion, but there are some jaw dropper moments (Jimmy's character gets one). In Rodriguez's films all kinds of people are secretly psychotic or unbelievably tough. In this case, pretty quickly, all the secrets come out!

Death Proof on the other hand, takes its time--yes--but if Terror is a stereotypical piece of its genre, Proof is the gem of its time we'll still be talking about three decades later. Death Proof is by far the stronger movie even if its opening (well, after the girl running for the bathroom sequence) takes its time to get to the heart-stopping middle. After that, it takes a twist that shows us why Quentin is a film maker we can't afford to take for granted.

I have to say that I went into these with lowish expectations: I'd see enough preview footage from Planet Terror to know that it wasn't going to really grip me. The girl with the prosthetic machine gun was too unlikely to really get me into any kind of the story. I didn't know what Proof was about--but it looked more interesting.

Despite some draggy bits--and some parts where I'm going "I get it. I get it. Okay, we can move on"--the movie had me and most of my buds howling with laughter during its three hours. The guy who liked Ghostrider more than Grindhouse was also the guy who had to be told that it wasn't, you know, an actual double feature ... so I don't think his vote counts for too much.

Is it good? Yeah. Yeah, it is good. Pieces of it are even great. It's an experience--and it needs to be taken that way. Like Snakes on a Plane you shouldn't go to Grindhouse expecting to enjoy good cinema. You should go with friends, ideally a little drunk, and expect to whoop it up.