Lord of the Rings, The: Motion Picture Trilogy 4K Review

The acting, directing, score, special effects and screenplay are excellent, and the three films have won seventeen Academy Awards combined. 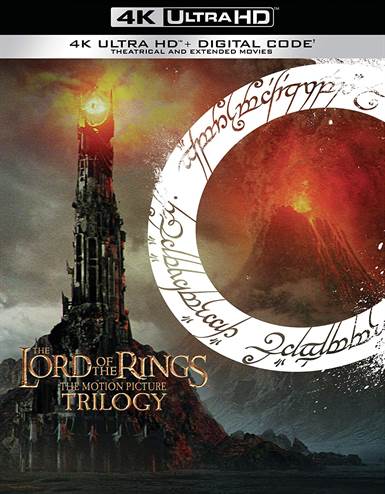 John Ronald Reuel Tolkien was born on January 3, 1892, and was able to read by the age of 4.  He was orphaned by twelve and was placed under the guardianship of Father Francis Xavier Morgan, as per his mother's wishes.  By sixteen he and his brother, Hilary, were living in a boarding house and attending King Edwards School.  He was known to be an apt pupil with an inquisitive and creative mind.  He later enrolled at Exeter College where he studied English Language and Literature and graduated with Honors.   After his schooling, Tolkien fought in World War I and ended up with trench fever at the Battle of the Somme.

After the War Tolkien returned to England where he worked for Oxford English Dictionary.  He later became a professor of Literature at several English Colleges.  In 1937 he wrote a children's story called The Hobbit and for the next twelve years, he wrote a follow-up novel, broken down into three volumes, called The Lord of the Rings.  The trilogy showcased Tolkien's creativity utilizing sorcerers, magical creatures, mythical lands, an "all-seeing" eye, and a made-up language. Initially, receiving mixed reviews, The Lord of the Rings has gone on to become one of the best-selling book series of all time.

While there have been a number of adaptations of Tolkien's masterpiece, arguably the most successful was a trio of films, directed by Peter Jackson (King Kong) and released in the early 2000s.  In 2001, The Lord of the Rings: The Fellowship of the Ring introduced J.R.R. Tolkien to a whole new group of people and delighted fans all over the world.  It was followed up in 2002 by The Two Towers and The Return of the King in 2003.  All three films were critical and box office successes and were ranked within the top 15 rated movies of all time on the IMDb website.

The Fellowship of the Ring introduces us to the key players of the plot – Frodo (Elijah Woods; Eternal Sunshine of the Spotless Mind), Sam (Sean Astin; The Goonies), Pippin (Billy Boyd; Seed of Chucky), Merry (Dominic Monaghan; Lost), Gandalf (Ian McKellen; X-Men: Days of Future Past), Legolas (Orlando Bloom; Pirates of the Caribbean: The Curse of the Black Pearl) and Aragorn (Viggo Mortensen; Green Book).  It sets the story of a fellowship determined to destroy the One Ring and with it its maker, Sauron (Sala Baker; Blood and Bone), in an attempt to bring peace to Middle-Earth. Of course, Sauron and his minions of followers are determined to prevent them from completing their goal.

While there have been other releases of the three films, both individually and as a set, this is the first time Warner Bros. is releasing them in 4K and Digital HD. The nine-disc set also offers both the theatrical and extended cut versions of all three films giving the owner over 20 hours to watch.  However, the packaging isn't as nice as some of the other releases and there are no extras on any of the discs (rumor has it there will be another release coming later on that will be more extensive and include brand new bonus features).

If you have never seen this trilogy, it's time you did.  The acting, directing, score, special effects, and screenplay are excellent, and the three films have won seventeen Academy Awards combined.  In almost every case, the casting is perfect, and the visuals/CGI are extremely well done.  These movies are a study in filmmaking at its finest and it is unsurprising that they have already grossed hundreds of billions of dollars worldwide.

Warner Bros. was smart to make the transfer to 4K as the trilogy naturally lends itself to the upgraded video quality.  Each has moments where "glitches" are slightly noticeable but overall, the picture is sharp and minute details are evident.  If it is even possible, the Dolby Atmos audio is stronger than the video quality with sounds surrounding the viewer so thoroughly that it brings the middle earth to life.  There are bold explosions during the fighting sequences and the dialogue is well balanced with the award-winning score.

When these films were released in the early 2000's it was unbelievable to think they could be improved upon but less than twenty years later, we finally gotten enhance video and audio quality.  This trilogy is one to get and keep for a long time.  The films were magnificent when they were released so the upgraded specs only serve to make an excellent product even better.  This box set will definitely be money well spent.

Purchase a DVD/Blu-ray/4K UHD physical copy of Lord of the Rings, The: Motion Picture Trilogy today at Amazon.com

Download Lord of the Rings, The: Motion Picture Trilogy in Digital HD/4K from the iTunes store.

Listen to the Lord of the Rings, The: Motion Picture Trilogy soundtrack on Apple Music.

For more information about The Lord of The Rings: Fellowship of The Ring visit the FlickDirect Movie Database. This release has been provided to FlickDirect for review purposes. For more reviews by Allison Rose please click here.