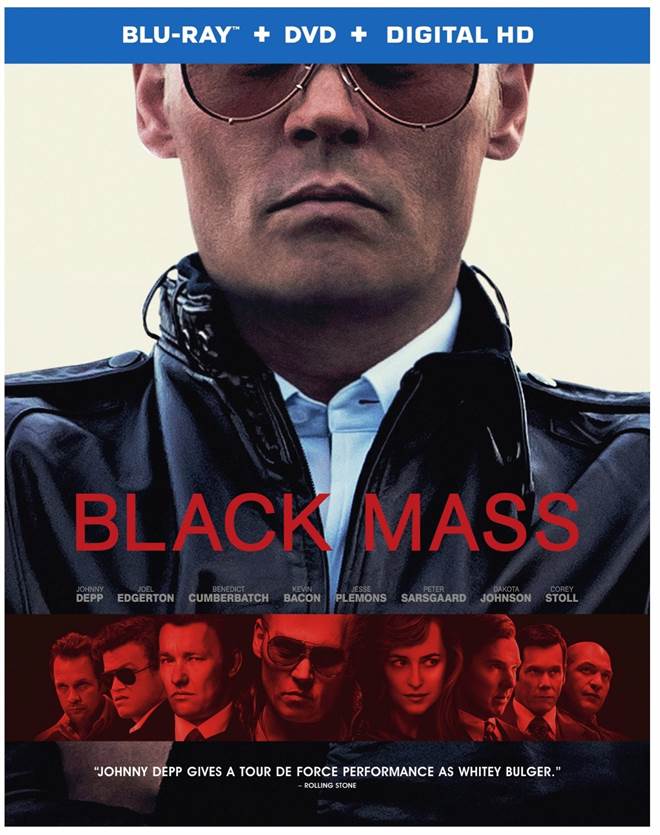 James "Whitey" Bolger (Johnny Depp; Pirates of the Caribbean) may have been a criminal, but he also reached a certain of level of genius.  How else do you manage to outwit the FBI when you are right under their noses?  Black Mass from Warner Bros. explores the complicated relationship between Bolger and his childhood friend, John Connelly (Joel Edgerton; The Great Gatsby), who was an FBI agent.

Directed by Scott Cooper (Crazy Heart), Black Mass is based upon the book by Dick Lehr and Gerard O'Neill. While Cooper tries his best at making a modern gangster film, he ultimately falls short. If you are expecting something in the vein of Martin Scorsese (Goodfellas), you will be sorely disappointed. The pacing of Black Mass is very slow and, at times, downright horrible. In fact, Cooper actually had to cut the original run-time of approximately 3 hours to 2 to help alleviate some of these pacing issues. However, it looks like it was just an exercise in futility.

As usual, Johnny Depp gives his all to his performance. At no time through the film did it feel like Johnny Depp was on screen, his persona and performance echo his character, James "Whitey" Bolger, through the entire run-time. In fact, the highest praise for his "in-character" persona was given by the some of Bolger's old time associates who were called in as consultants for the film. They praised Depp's performance by simply saying, "That's Whitey".

Supporting cast members Benedict Cumberbatch (The Imitation Game), Joel Edgerton (The Gift), Dakota Johnson (Fifty Shades of Grey), Kevin Bacon (The Following),  Jesse Plemons (Observe and Report ), and Rory Cochrane (Argo), do the best they can with the script and material, but even though their performances are top notch, they can't save the film from it's script and directing.

Presented in 1080p AVC, Black Mass goes for a very muted pallets to depict Boston during the era of Whitey Bolger. While the visual style of this film does not lend the Blu-ray to "wow" audiences, the picture quality holds up pretty well with no artificating to be found. The audio, presented in DTS-HD MA 5.1, does an adequate job with the dialog, but not not much else. Just like the video, it is not something that will blow away viewers.

Aside from the theatrical film, Warner Bros. and the creative team behind Black Mass, have presented a decent line up of special features to accompany the film.

Black Mass: Deepest Cover, Darkest Crime— Main featurette on the making of Black Mass. Contains interviewed with Cumberbatch, Depp, Cooper, and more. Something  interesting that was talked about during the featurette was the fact the Cooper tried to shoot most of the film where the actual events took place, even the burial of murdered bodies.

Johnny Depp: Becoming Whitey Bulger — This featurette delves into the process in which Jonny Depp became Whitey Bulger. Not just with make-up, but mindset as well.

The Manhunt for Whitey Bulger - A feature length documentary recounting the capture of the real life Whitey Bulger, one of  FBI's Most Wanted  fugitives.

Digital HD copy of Black Mass - An ultraviolet digital copy of the film.

While Johnny Depp has professed that Black Mass is the film he has enjoyed doing the most in his career thus far, I would  have to disagree. While Black Mass is a technically sound movie, it lacks the heart and soul for me to care about it's characters or plot.

For more information about Black Mass visit the FlickDirect Movie Database. This release has been provided to FlickDirect for review purposes. For more reviews by Nathan M Rose please click here.

Allison Rose
Black Mass isn’t a docudrama, nor is it a “gangster” film; and, as a straightforward drama it just isn’t all that strong.
Full Review | Grade: C